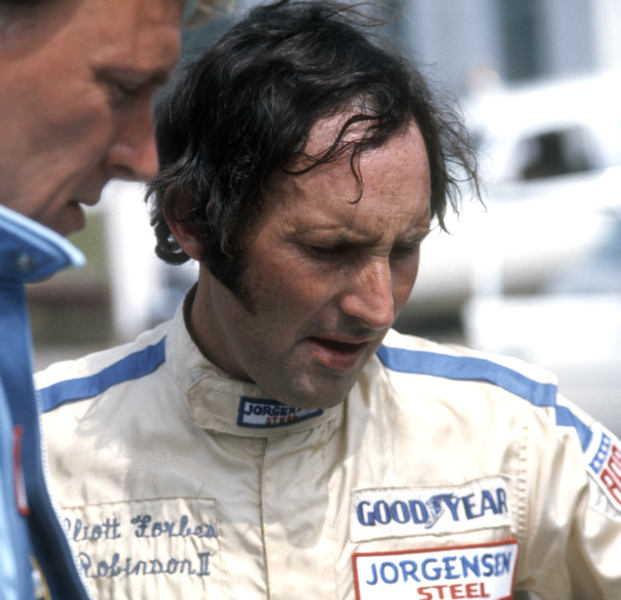 The racing industry is ever-changing. Teams, drivers and sponsors come and go before people remember they were there. But for over five decades now, at least one thing in motorsports hasn't changed: Elliott Forbes-Robinson winning races.

Getting his start in the Sports Car Club of America (SCCA), Forbes-Robinson went to driving school in 1968 in Riverside, Calif. Receiving his racing license shortly thereafter, he competed in his first professional race in a 289 Ford Cobra at Stardust Raceway in Las Vegas later that year. As soon as the checkered flag waved, he was hooked for life.

Forbes-Robinson's list of racing accolades is spread among a variety of racing entities. A former Trans-Am and sports car prototype champion, he has scored victories in over seven different series, winning at least one race in each of the past five decades. He won his first professional race in the Trans Am Series, winning in 1969 at Sears Point in a Allred brothers Porsche 911S. Not too long after, he agreed to run fellow road racing great Richie Ginther's parts department in exchange for seat time in Ginther's Porsche 914/6 and Super Vee cars.

He also became a staple of the second-generation Can-Am series in the late 70s and early 80s, joining Rahal and Sullivan but also battling on track with the likes of Jacky Ickx, Patrick Tambay and Al Holbert. Forbes-Robinson won the Trans-Am series championship in 1982.

EFR has truly raced it all. From SCCA to Super Vee, Formula 5000 to World Sports Cars, he has also competed in World Challenge, IMSA GTP, GTO, GTU and Supercar and most recently Daytona Prototypes in the Rolex Sports Car Series, where he won two races in 2005 at the age of 61. He has even tried Pro Rally, the Baja 1000 (winning twice) and Pikes Peak. He also competed in 23 NASCAR Cup races, finishing inside the top 10 three different times.

Every driver has a landmark victory that will forever be mentioned in the same breath. For EFR, that victory came in 1997, when piloting a Ford Riley & Scott with Andy Wallace, James Weaver, Butch Leitzinger, John Paul Jr. and Rob Dyson, Forbes-Robinson clinched his first overall victory in the Rolex 24 At Daytona. Two years later (again with Wallace and Leitzinger), EFR scored his second Rolex 24 victory. The win marked the beginning of a year which saw EFR win dual sports car championships, in USRRC and ALMS.

Even with the list of accomplishments as long as it is, Forbes-Robinson remains one of the most approachable personalities in the paddock. His boyish demeanor and ear-to-ear smile endear him to fans and competitors alike. There isn't a person who can better represent this enshrinement more than EFR, but don't think for a moment that this induction signifies the end of an illustrious career. There's a possibility that Forbes-Robinson will compete in the last two rounds of the Rolex Series-the nine-hour finale at the brand-new Miller Motorsports Park, and one week earlier at the site of his first pro win, some 37 years ago, at Sears Point.