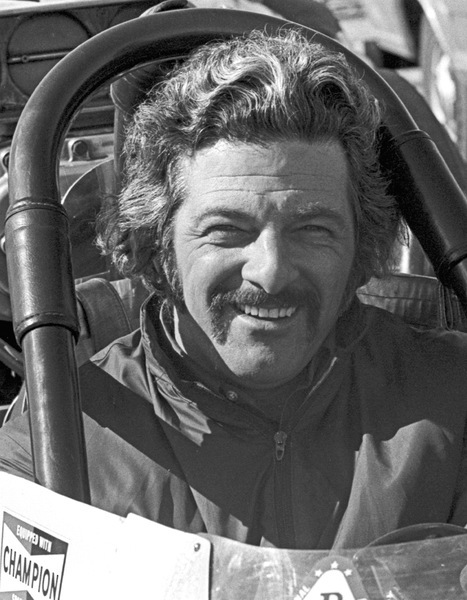 The vast majority of inductees in the Motorsports Hall of Fame have amassed astounding records on the track, but there's more to a successful career than a checklist of wins and losses. Numerous individuals have had dramatic impacts on their chosen fields of competition without ever having challenged the statisticians, and such is the case with the man known from Coast to Coast as "The Greek," Chris Karamesines.

Just as Hall of Famers "Big Daddy" Don Garlits, Shirley Muldowney and "TV Tom" Ivo played significant roles in helping make drag racing an accepted form of motorsports, so too has Chris Karamesines, but unlike those mentioned, "The Greek" is still driving his 7,000 horsepower Top Fuel dragster in his seventh decade!

To understand Karamesines's impact on the sport one must look far beyond his unofficial breaking of the 200 MPH barrier back in the early 60s. Prior to the time of Karamesines's remarkable run at Alton Dragway in Illinois the Windy City native had impressed West Coast fans with his showmanship, competitive performances and, most importantly, his unmatched personality. Soft-spoken to a fault and bearing an often uncanny resemblance to movie star Caesar Romero at the height of his box office appeal, when "The Greek" climbed out of his car and said things like, "I went so fast that time my mustache almost caught fire!" people listened –and didn't forget.

When the late Jim Tice conceived the AHRA Grand American Series in the late 60s that included paying appearance fees to eight of the most popular Top Fuel dragster and Funny Car drivers of the day, Hall of Famers Garlits, Don "The Snake" Prudhomme, Tom "Mongoose" McEwen and Karamesines were at the top of the list.

The Grand American Series was somewhat akin to the barnstorming days of the 1920s and ´30s in that it brought major league drag racing to the nation's hinterlands, with few of the participants having the personal magnetism to match that of Karamesines. Almost overnight he "took over" the Top Fuel contingent, with his peers vying for positions in what became known as "The Greek Fleet." Karamesines was the Captain, a beneficent leader who assigned titles to his minions, often late at night as they worked on their cars in hotel parking lots (eight man crews, tractor/trailer rigs and seven figure sponsorships being 40 years in the future). Almost weekly Karamesines would "promote" or "demote" his compatriots, and woe be to the unfortunate given the "cabin boy" moniker. Fans perusing the cars often asked what the subtle "Greek Fleet" lettering on a car's cowl meant, and why a guy like "Mad Dog" Don Cook had been listed as "First Mate" on Friday and had become "Cabin Boy" by Sunday morning. If nothing else the exercise elevated Karamesines to mythical status, but it was his fire-belching burnouts and tire-smoldering runs that had the fans cheering for more.

Other than a small coterie of supportive aftermarket manufacturers, Karamesines never had a major sponsor, and as the costs of competing escalated his on-track fortunes waned. Still, as other names began to dominate the headlines the media and his fellow competitors never forgot Karamesines and what he stood for – the independent racer always intent on pleasing the fans and performing up to his own high standards.

His occasional forays into NHRA national event competition were particularly revealing because he was largely unknown by the younger fans, but when observant PA announcers began to tout his advancing years and colorful history, Karamesines attracted a whole new generation of supporters. While there might be a couple of hundred fans jammed against the restraining ropes of the championship contenders, almost the same number would be standing inches from Karamesine's side as he adjusted the valves or packed his parachutes. Not surprisingly, if you polled the cognoscenti about who they were pulling for as eliminations began, more than half would respond with "The Greek's" name.

Chris Karamesines' name doesn't now, nor will it ever dominate the record books. He's never been a season titlist, but his place in drag racing's colorful history is assured. Not surprisingly, a decade from now, when few will remember today's champion, they'll remember Karamesines – not only for what he brought to drag racing, but because this ageless wonder may still be pulling to the starting line in a Top Fuel dragster. And why not? He'll only be in his early 80s!