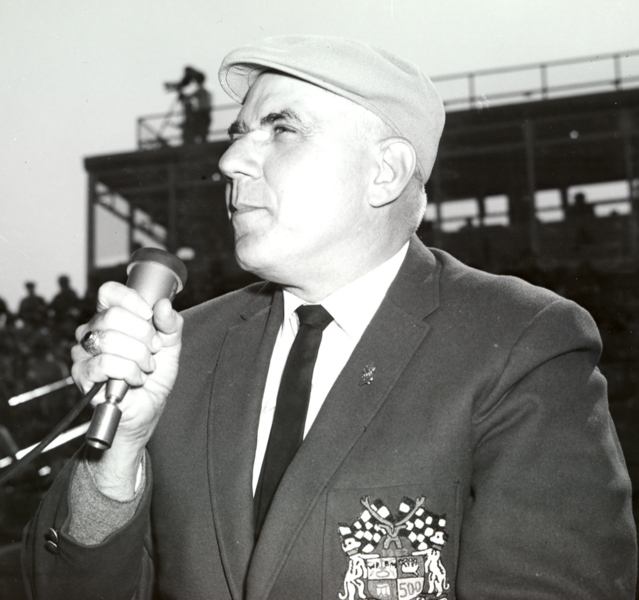 Few of us can honestly say we've contributed to the lexicon of a sport, but one man certainly has: Phrases like: "Heeeezzzzzz ON IT!" Or, "It's a newwwww track rrrrecord!" Or, "Mario is slowing on the backstretch!"

All courtesy of Tom Carnegie, the announcer at the Indianapolis Motor Speedway for 60 years.

"He is one of those rare individuals who created a persona that can be imitated, but can never be duplicated," says the subject of one of those trademark phrases, Mario Andretti. "He represents so many exciting moments in motor racing."

Through the myriad changes in motorsports, Carnegie's voice is one of the few constants. After a couple of artificial hips and artificial knees, he shows no signs of slowing.

Carnegie, a native of the Kansas City area, had hoped to play professional sports until a viral fever hospitalized him for months and weakened his legs to the point where he knew he'd never play with the pros. But even as a young man, Carnegie had those pipes, and it led him to broadcasting. He ended up in Indiana, and his narration of a car parade caught the ear of Indy 500 officials. He called his first Indy 500 in 1946. Until then, he'd seen only one race, and that was in Illinois while on vacation. It took 10 years, he says, before he was comfortable with the job.

Throughout the years, Carnegie has had a front-row seat for triumph and tragedy. In the early days, injuries and fatalities occurred on a regular basis. After losing many friends in racing, perhaps most notably one of his best friends, racer Jim Clark, Carnegie learned why many people in motorsports try not to get too attached to drivers.

Carnegie considers the advances in safety to be the most positive change he's witnessed. "We didn't know anything about safety then. Danger was just a fact of life."

Dramatizing the dramatic has been Carnegie's challenge-and his forte. And not only on race day. For decades, his descriptions of the relentless quest to break speed barriers built main event sized crowds-for time trials!

Still, the last Sunday in May was Carnegie's Main Gate to immortality.

For 61 Memorial Day Weekends, Tom Carnegie's calendar was full. As were the calendars of hundreds of thousands of fans, for whom it just wasn't Indy until they heard those phrases, those Carnegie-isms.

Phrases that, Carnegie says, "just happened. I never intended to patent any of them." Maybe he should.

After the 2006 race, Tom Carnegie put down the Indianapolis Motor Speedway microphone for the last time. The Indy 500 will never be the same

"When he is no longer in the announcer's booth, there will be a huge void," says Mario Andretti. "You cannot say that about too many individuals in life. He is an intricate, exciting part of our sport and of the biggest spectacle in racing, the Indianapolis 500."