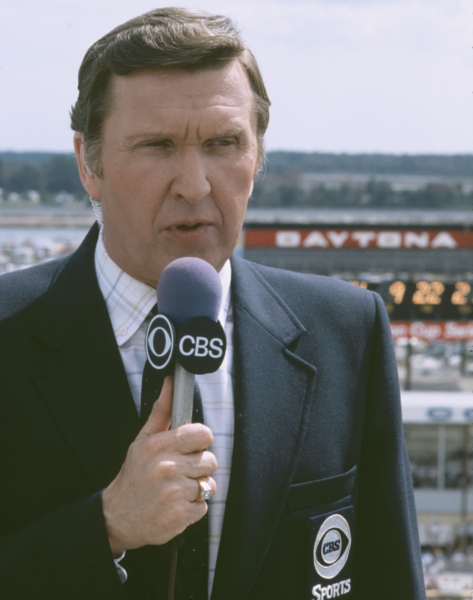 On a spring afternoon, at age 14 Ken Squier stood on the back of a flatbed truck at the Morrisville, Vermont, Speedway. Microphone in hand, as the track's announcer he called the day's races. Squier was beginning what has become a 60-year career in our sport during which he has contributed enormously to the enjoyment of millions of fans as he's told stories about common people doing uncommon things as racers. Along the way, those contributions have helped to grow the sport.

Squier is above all else a race fan. He loves racing and the people who populate it. Just listen as he tells his stories on air and you can hear the enthusiasm in his voice. Or go back and listen to his calls as Squier anchored many CBS and TBS broadcasts, bringing live stock car racing into the homes of millions of Americans.

Best known for his on-air work at CBS, Squier helped develop much of what we now appreciate and enjoy when listing to racing on the radio or watching it on television.

He was also a founding father of live flag-to-flag TV auto race coverage. Squier not only anchored the dramatic 1979 Daytona 500 on CBS, he was instrumental in talking the network into carrying the show. It was the first 500 mile stock car race carried live in its entirety on over-the-air broadcast television.

As other networks became involved, Squier and his partner Fred Rheinstein's founded and ran World Sports which played a major role.

Squier's Motorweek, which aired weekly on TBS, was the original auto racing magazine on television. There have been dozens of imitators since.

At age 21, Squier built Thunder Road Speedway in his home state of Vermont. With his partner Tom Curley, in the 1960s he created a five-night-per week circuit for local short track racers.

He has been a trusted advisor to people in every level of racing from NASCAR head Bill France Jr. to New Hampshire Motor Speedway creator Bob Bahre, to many of the sport's television personalities and even to local racers.

Squier named the Daytona 500 "The Great American Race." His call of the 1979 race is the most famous and the most replayed of any in the history of stock car racing.

For many of today's racing-on-television announcers, Ken Squier is the gold standard. Every good announcer in the sport has done his best to follow Squier's lead of story-telling, intense preparation, of communicating the excitement of the sport to its audience, and of making understandable the complexity of an exceptionally intricate sport.

The 70-something year old Squier remains very active. In addition to his racing activities, he and his wife Elizabeth operate a sheep farm in Vermont. He's also chairman of the Vermont Symphony Orchestra.

As others in his age group have long given up working and retired to rocking chairs on the front porch, Squier still runs his Thunder Road Speedway, the most successful short track in America. Running on Thursday nights, the pits are full of cars whose drivers thrill standing-room-only crowds to some of the most exciting racing in America.