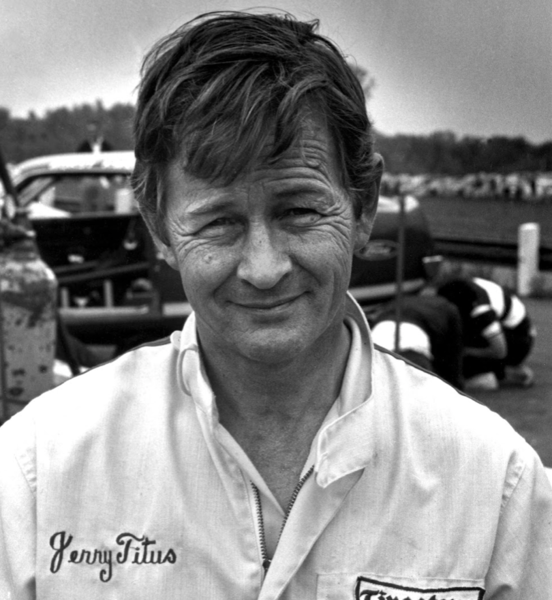 Born in Johnson City, New York on October 24, 1928, Jerry Titus was a multi-talented individual. An early desire for a career in music led to his enrollment in The Juilliard School, Music Division. As an accomplished trumpet player who played with Jack Teagarden's band, Titus' musical talent was also evident as a composer and arranger. In time all this gave way to motorsports competition.

The mechanically- inclined Titus found an outlet for his mechanical and creative talents when he went to work for Bill Frick Motors where Jerry learned the specialized field of racing mechanics. Soon he was servicing Maseratis for Frick and Carroll Shelby. He also found in testing the cars that he was as fast as the best drivers of the day. Since Frick owned the team, but did not like to write or deal with public relations, he gave this responsibility to Titus. This provided a natural outlet for Jerry Titus' creative and writing abilities and his association with automobiles; his first article was published in Speed Age in 1954. During the late 1950s, Jerry left Frick's shop and worked for a year as a service engineer for General Motors, leaving that position to become Editor of Foreign Cars Illustrated.

In 1960, Titus began his racing career as a foreman and team driver for Beiner Imports, campaigning Formula Juniors in Sports Car Club of America events. The next year he moved to Los Angeles to become Technical Editor and in 1966 Editor of Sports Car Graphic.

In 1966 Shelby offered Titus a position on the Ford Mustang Trans-Am Team. Until September 1968 Jerry Titus was the number one driver on the team, winning the Manufacturer's Championship for Ford in 1966 and 1967.

During 1967 Titus led all series drivers with four wins behind the wheel of the Terlingua Racing Team Mustang.

In late 1968 he left the Shelby team to accept Terry Godsall's offer to campaign Pontiac Firebirds. In 1969 he finished third in the Trans-Am Series while recording an outstanding third place overall finish at the 24 Hours of Daytona. For 1970 T/G Racing fielded one Pontiac Trans-Am Firebird. After a mechanical failure and crash at Road America, Jerry Titus lost his life on August 5, 1970.

In addition to being a top flight driver in sedan racing, he also raced in the Canadian –American Challenge Cup Series in a King Cobra and McLarens with good success.

His many years of racing won Titus the respect of friends and competitors, always willing to lend a hand when needed. A tough competitor on the track, he was equally admired as a gentleman away from the rigors of the challenge which was so much a part of the man's life.