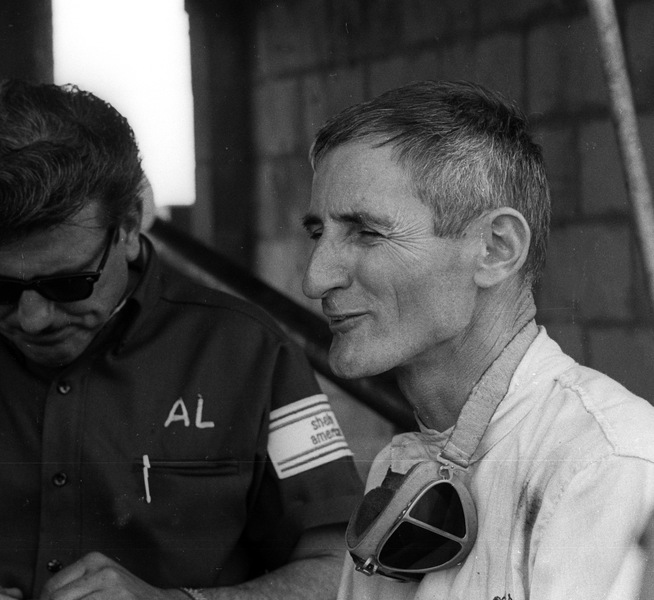 Ken Miles survived World War II at the controls of a British Army tank only to perish behind the wheel of a prototype race car, but not before winning the 24 Hours of Daytona, the 12 Hours of Sebring and many other sports car races in a variety of machines. He also played a key role in turning Carroll Shelby's Cobra into a race-worthy machine.

Born on Nov. 1, 1918 in Sutton Coldfield, England, near Birmingham, Miles competed on motorcycles before the war, during which he served as a tank sergeant in the British Army.

Miles switched to auto racing after leaving the service. He ran Bugatti, Alfa Romeo and Alvis with the Vintage Sports Car Club, before taking on an old Ford V8-powered Frazer-Nash, which saw action at Silverstone, Brands Hatch and other venues.

In early 1952, Miles moved to California. His first race in the States was in a stock MG TD at Pebble Beach. He was disqualified for reckless driving when his brakes faded without slowing his lap times.

In 1953, he drove the tube-frame MG Special to 14 straight victories. He sold that car the next year to campaign a TF while building the famed Flying Shingle. Miles also ran a Triumph TR-3 in 1955 during the Shingle era.

In 1956, he drove a Porsche Spyder. The next year he campaigned a Porsche-Cooper combination called the "Pooper," which defeated the factory Porsche at Nassau. Miles was working with Porsche dealer John von Neumann, who according to one source was ordered to get the Pooper off the competition trail or lose his franchise.

Miles ran an RSK Porsche for Otto Zipper, another dealer, in 1958. His next ride was a Maserati in 1961. That was the year he started test work for Rootes on the Alpine and helped develop the Dolphin Formula Junior.

That work brought him to the attention of Carroll Shelby, who brought Miles onto the Cobra development team. He started as a driver and held several titles including competition manager.

According to the Encyclopedia of Auto Racing Greats, Miles was responsible, perhaps more than Shelby, for turning the Cobra into a race-worthy machine. He also had a major part in the development of the Ford GT-40 and its Mk. II successor as well as that of the Mustang GT350.

He later returned to Zipper part time in 1965 to drive a Carrera in the US Road Racing Championship.

Miles died on Aug. 17, 1966 when the J-car he was testing at Riverside International Raceway in California suddenly looped, flipped and crashed. He was 47.