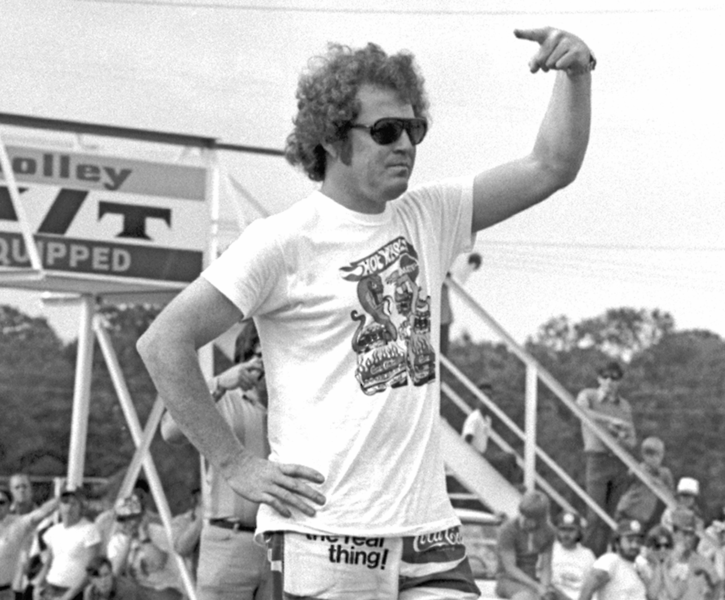 There is probably no man in drag racing history who has driven more different cars than Tom McEwen. He began his career by sneaking his mother's '53 Oldsmobile out to race at Santa Ana before he was old enough to have a driver's license. His driving career spanned nearly four decades and the gamut of drag racing entries from the hot-wired Olds to fuel dragsters and funny cars sponsored by Fortune 500 companies.

After winning a match race over Don, "The Snake" Prudhomme in 1964, his car owner, the late Ed Donovan recalling Kipling's "Jungle Book," nicknamed McEwen "The Mongoose." He would eventually sign his autograph with a dollar sign substituting for the "s" and use the handle as a tool to bring him fame and fortune for many years to come.

After moving up from stock cars, through gas coupes, supercharged gassers and altereds, McEwen was coached in the art of dragster driving by the legendary Art Chrisman. McEwen obviously learned well enough that in the early '60s he drove myriad gas and fuel dragsters. Owners such as Donovan, Gene Adams, Lou Baney, Chrysler Corp. and Ford Motor Co. all availed themselves of the " 'Goose's" services.

One of the first to realize the value of non-automotive sponsorship, McEwen theorized that "a big following and good performance is better for sponsors than big wins and no following." And the colorful McEwen always had a big following. In the '60s he adapted an Ali-like persona vowing what he would do to opponents in trade paper and radio advertising, flashing the "V" for victory sign from the cockpit at opposing drivers and in general playing a part much like the villain in wrestling.

Away from the track he was a pioneer racer's activist. In 1969, together with Prudhomme he formed Wildlife Racing Enterprises and through a connection he had with Mattel Toy Co., negotiated the biggest sponsorship deal to that time in drag racing history. The Hot Wheels team with both drivers racing top fuel and funny cars lasted three years. "'Goose's" wit and showmanship were the perfect contrast to the intense "Snake," and millions of Hot Wheels toys were sold. Kids who had never heard of drag racing became instant fans. When the deal ended, McEwen already was prepared with other corporate backing that supported his racing efforts into the 1990s.

McEwen won his share of major races including Funny Car Eliminator at 1972's "Last Drag Race" at legendary Lions Drag Strip, where he had probably made more passes than any other driver. He won Top Fuel at the '72 Bakersfield March Meet and Funny Car Eliminator at the '73 Supernationals at Ontario. But, perhaps his greatest victory came at the 1978 NHRA U.S. Nationals in Indianapolis. The Funny Car final round featured the two old teammates, rivals and partners, "The Snake" and "The Mongoose" meeting for what seemed like the thousandth time. Prudhomme nearly had the field covered and was appearing in his sixth straight Indy final. McEwen at best was a long shot. Mustering everything he had, McEwen ran the best time of his career to down the Snake in honor of his teen-aged son Jamie who had died from leukemia only weeks earlier. The two crusty old veterans of the drag racing wars shared an emotional, tearful embrace in the shutoff area.

Belying his apparent carefree lifestyle, it's a little-known fact that McEwen spent countless hours visiting kids in hospitals and raised thousands of dollars for the Leukemia Society in memory of Jamie. He won dozens of races and numerous season championships. He drove countless race cars and had legions of fans. But perhaps "The Mongoose" will be best remembered for bringing drag racing into thousands of homes that had never before been exposed to it, helping make it the major sport it has become.