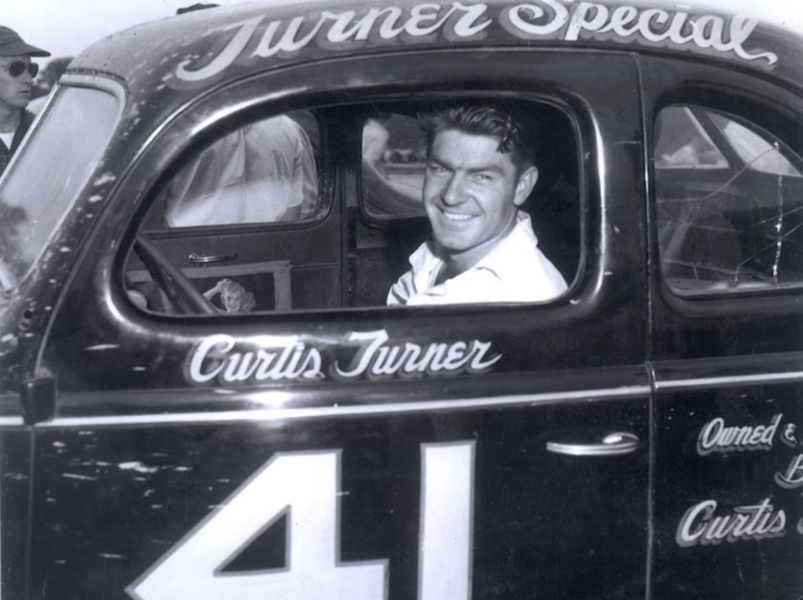 "The Babe Ruth of Stock Car Racing." Tag a sports figure with so mythic a designation and he'd best be able to live up to it. Curtis Turner, the original superstar of NASCAR, whose cars danced brilliant slides across the old beach course at Daytona, whose determination behind the wheel made him a fan favorite and a threat on dirt ovals and swift superspeedways, and whose larger-than-life presence in the sport as a driver-businessman made his name, wore the distinction well.

Whether he was setting the then-record for most wins in a season (23 in 1956), or raising the funds necessary to build his beloved Charlotte (now Lowe's) Motor Speedway, he remained a man of enormous vision and talent. As Humpy Wheeler said, "He may have been the best natural race driver we've seen." Added Benny Parsons, "Ask any fan under fifty, ´Who's the greatest driver you ever saw,' and it's Dale Earnhardt. Ask anybody over fifty - including the pioneers who drove at the beginning - and the answer's Curtis Turner."

His illustrious career began as many did during the seminal southern racing days, driving modifieds on makeshift tracks while moonshining in the 1940s. By then Turner had also begun his millionaire career as a timber broker; he'd eventually buy and sell the equivalent of six percent of North Carolina. But when his good friend William France started NASCAR, Turner was there, running in that first race in 1949, beginning an exceptional ride in the elite leagues. He was the first driver to win two-straight NASCAR races while leading every lap. He teamed with France in 1950 in the first Mexican Road Race, and essayed a final-day run so startling, one historian wrote, "It is doubtful anyone ever put on a greater performance behind the wheel of an automobile." When the NASCAR Convertible Division raced from 1956 through 1959, Turner won an astounding 33 of the first 74 races, including 22 out of 47 in year one, the season he also captured the Southern 500 and the sports first-ever most popular driver award. In all, he won 17 times in what is now the Nextel Cup division, including the 1965 American 500, the first race at Rockingham, which sealed his comeback after four years away from NASCAR.

But he's remembered most for doing what others simply refused to. Turner could execute a perfect 180-degree turn on a single-lane bridge. A handsome, dazzling figure, he threw parties that were legend, his house becoming the land of a thousand anecdotes. Until he did it, no stock-car racer had run the treacherous Pike's Peak Hill Climb in under 15 minutes. He tried to send satellites into space. And when Jimmy Hoffa and the Teamsters asked him to start a driver's union-in exchange for their broken promise of a loan to save his speedway-he did so, crossing swords with France, who banned him "for life" in 1961. After sitting out some prime years, Turner was invited back in 1965, and he thrilled again. It is for these achievements as well that he became, in 1968, the first NASCAR driver ever put on the cover of Sports Illustrated.

And only two years later, he was gone, at 46, after crashing his plane in Pennsylvania. His peerless legacy remains: Turner is one of NASCAR's "50 Greatest Drivers," a revered figure even among current racers and a member of many halls of fame. And now, finally, he shines here as well.