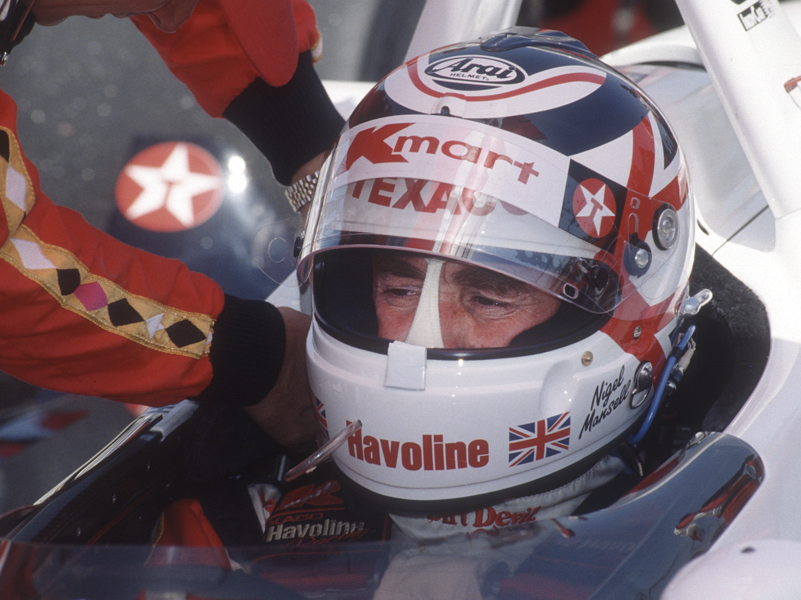 Few figures in motorsports had a more polarizing effect than Nigel Mansell. Known by either the British workingman's moniker "Our Nige," legendary broadcaster Murray Walker's label "Red 5" or "il Leone" as anointed by the lionizing Italian "tifosi" during his years at Ferrari, his aggressive driving style made him a hero for legions of fans around the world.

For many who had to race and work with him, however, the terminology is somewhat less flattering. His abrasive, demanding and necessarily self-centered personality irritated many, as did his penchant for unnecessary theatrics, antics that often proved detrimental to his cause.

Whichever view may prevail, however, the undeniable record of accomplishment compiled by the once-mustachioed Englishman easily qualifies him for the Motorsports Hall of Fame.

Thirty-one victories from a dozen F1 seasons rank him fourth all-time, while 32 pole positions is fifth-best, and his "Double World Championship" of 1992-'93 remains an unparalleled accomplishment. After driving a Williams-Renault to the FIA's Formula 1 World Championship, he abandoned what he considered an uncaring F1 for a unique encore in America.

Here he took his Newman/Haas Lola-Ford to the IndyCar World Series Championship, winning his debut outing in Surfers Paradise, then following up with four more wins – all on heretofore unfamiliar ovals -- to claim the crown. During his two seasons on the American National Championship Trail he collected five wins and 10 poles from 31 starts, but his second and final year descended into acrimony with a pair of seconds and a third the best he could muster.

Controversy seemed a constant companion throughout his career. His climb to the top was filled with body-breaking episodes that served only to reinforce his desire to prove his value. That he rose to prominence during an era dominated by two of the all-time greats, Alain Prost and Ayrton Senna, only embellishes his legend.

Save for fickle fate he might have won three World Championships. In 1986 he went to the finale in Australia with a slim lead, only for an exploding tire to hand the crown to Prost. Closing the '87 season in Japan, his championship challenge was derailed by a backbreaking crash in pre-race practice that forced him to watch from a hospital bed as teammate and archrival Nelson Piquet took the title.

He made his GP debut with Lotus in 1980, but his best result in four years there was only a third, so after founder Colin Chapman's death he switched to Williams. Enzo Ferrari signed him for 1989, and by wining first time out he endeared himself to the team. Or so it seemed, but paired with Prost for 1990, his results suffered from mechanical unreliability. Returning to Williams for '91, he became champion in '92 and, after his second American campaign, rejoined Williams late in '94 to win his final GP in Australia.

After a decade mostly away from the sport, he's now the man to beat on F1's global senior's tour, Grand Prix Masters. The fire still burns in his belly.