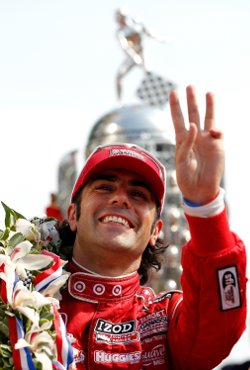 Over six years between 2007-2012 Dario Franchitti established himself as IndyCar's biggest star of that era. During that time Franchitti won four IndyCar championships and three Indianapolis 500s and was also part of the winning team in the 2008 Rolex 24 at DAYTONA. Unfortunately his career was cut short by an accident on a street circuit in Houston in 2013.

Franchitti's car was hit by Takuma Sato's lapped car and flew into the catchfencing leaving him with serious injuries, including two broken vertebra, a broken ankle and a concussion. He announced his retirement a month later after doctors told him any further accidents could prove fatal. Franchitti retired with 31 CART and IndyCar victories from 265 starts, tying him at the time with Paul Tracy for ninth on IndyCar's all-time winners' list.

Born and raised in Scotland, Franchitti's career was encouraged by his father George through karts and into the small formula car categories. He showed his talent by winning the Formula Vauxhall championship in 1991, and went on to win a handful of Formula Three races for Jackie Stewart's son Paul's team. In 1995 Dario was signed by Mercedes-Benz for the German Touring Car Championship and two years later Mercedes moved him to the United States to drive Carl Hogan's Mercedes-powered Indy car.

After a year with Hogan, Franchitti joined Barry Green's Honda-powered team and battled with Juan Pablo Montoya for the 1999 CART title. Franchitti and Montoya finished the year tied on points with the championship going to Montoya because he won more races. Team Green was among a group of CART teams who moved to the Indy Racing League in 2003 with Michael Andretti becoming first Green's partner and then sole owner of the team. With Andretti, Dario began to hit his stride in 2007, winning his first Indy 500 and IndyCar Series title.

Franchitti moved to NASCAR in 2008 but quit in the middle of the year to return to Indy cars with Chip Ganassi's team. He went on to win five races and a second championship in 2009. Repeating in 2010 and '11 gave him four IndyCar titles, tying him for second all-time behind inductee A.J. Foyt. The following year Franchitti scored his third Indy 500 win, which turned out to be his last IndyCar victory.

One of the things that stands out about Franchitti is his deep knowledge and enthusiasm for racing's history. "I have a great appreciation for the people who came before me in this sport, whether they were F1 drivers, NASCAR drivers, Indy car drivers, or sports car drivers," he said. "I like looking at pictures of old race cars. I love driving old race cars. I love talking to people about old race cars and to the drivers who have come before. I read about it a lot and I've been lucky enough to drive of lot of historic racing cars at vintage events around the world, which is just great!"

Franchitti was awarded an MBE (Member of the Order of the British Empire) by Queen Elizabeth in 2014. He and his second wife Eleanor live in London and have a daughter Sofia who was born in 2015.

Gordon Kirby is one of the world's most accomplished racing writers. He's covered more than 1,000 races over the past 45 years for magazines and newspapers around the world and has written 15 racing books and biographies. His latest, 'Wally Dallenbach Steward of the Sport,' was published in 2018.