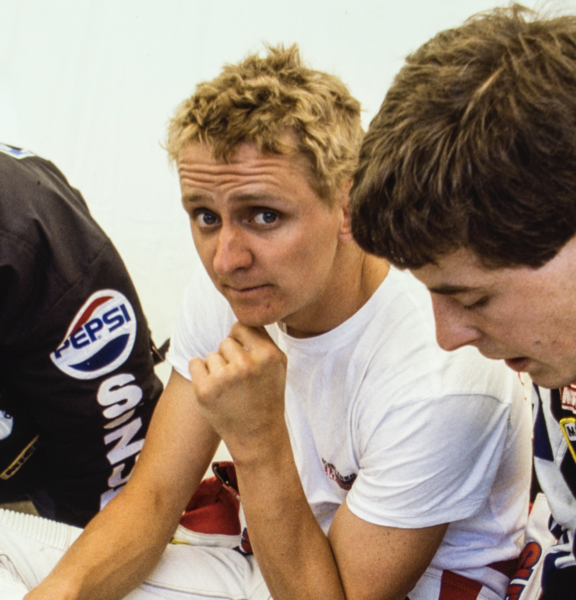 Born the son of a motorcycle shop owner in Texas in 1964, Schwantz started riding at 4. Soon he competed in Observed Trials where speed is not a factor but balance, finesse and reading the course are critical. Later Schwantz moved to motocross where he combined his trials skills with aggressiveness, endurance and strength. Injuries sustained at the 1983 Houston Supercross persuaded him to quit motocross at 19, but before he did so, he'd tried his hand at a local Texas road-racing event on a converted flat-track racer borrowed from motorcycle-racing uncle Darryl Hurst. Victory in that first road race set the stage for his subsequent career.

Richard Chambers, Daytona's motorcycle race announcer, said that Kevin's riding in the 1984 Yamaha RZ Cup race was brilliant and foreshadowed a future champion. Roadracing World's John Ulrich also took notice of Schwantz's Daytona victory and arranged a test session later that year with the Yoshimura Suzuki Superbike team in California. Signed by Yoshimura, Schwantz promptly won both legs of the 1985 Superbike race at Willow Springs for his first AMA national victory. He finished second to inductee Eddie Lawson at the 1986 DAYTONA 200, then won it in 1988 despite fracturing a forearm in practice.

But it was the 1987 AMA Superbike season that would turn out to be one of the most thrilling in the sport's history thanks to Kevin's season-long battle with fellow inductee Wayne Rainey. Their epic duels demonstrated and honed the skills that would eventually catapult them both to FIM 500cc World Championships. Rainey took that 1987 Superbike title, but Schwantz won five of the last six races.

During 1986 and 1987 Kevin had also raced at several GP events in Europe, and the following year would mark his nearly complete crossover from AMA Superbike to the FIM 500cc World Championship. Following his '88 DAYTONA 200 victory, Kevin went on to win his very next race and his first-ever GP for Suzuki at the Suzuka circuit in Japan.

Schwantz won at least five GPs every season from 1989 through 1991 and was a constant threat for the title, including 1990 when he finished second to Rainey. In 1993, at 29, he stood on the top rung, the new FIM 500cc World Champion. More victories and podiums followed, but so did a string of injuries and early in the 1995 season, Kevin retired from motorcycle racing. His 25 career victories put him third all-time among Americans, behind inductees Lawson and Freddie Spencer. His #34 was the first racing number retired by the FIM.

Later Schwantz was a co-designer of the Circuit of Americas racetrack in Austin where world championship rounds for both motorcycles and F1 cars are run. More recently he opened a world-class riders school and remains a great ambassador for the sport.