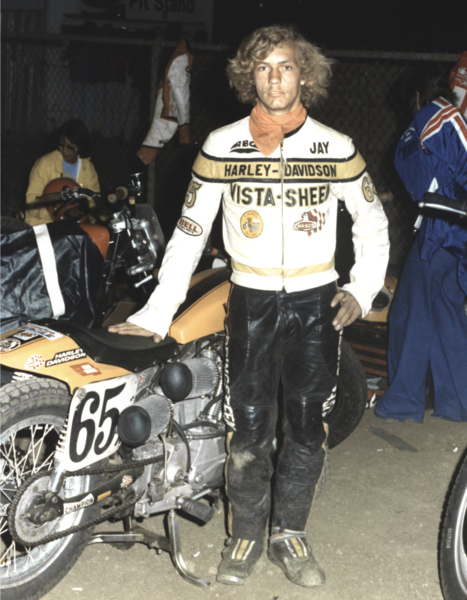 Jay Springsteen simply loved flat track motorcycle racing better than anyone else ever has. In a career that spanned four decades, the man who has affectionately become known to his undying legion of fans as "Springer", defined the sport as much as it ever defined him.

His spectacular, wide-open throttled riding style, which was punctuated by considerable upper body English in order to keep his motorcycle as upright as possible to achieve maximum traction to the rear wheel, immediately impressed both fans and fellow racers alike.

In one instance early in that 1975 season, Springsteen blew past a seasoned veteran - the man a former National Champion and far from over the hill - on the outside of a corner, feet up and wide open. It spooked the veteran, who confronted the young Springsteen in the pits and asked by what right did he think he could make such a ferocious move. Springsteen just smiled and replied, "Because I can do it."

At 19, Springsteen joined the factory Harley-Davidson racing team and became the youngest rider ever to win the coveted AMA Grand National Championship, in 1976. He would go on to absolutely dominate the sport for the next two seasons, claiming the title again in 1977 and 1978.

Even after losing the title while battling a mysterious stomach ailment in 1979, Springsteen never stopped winning races. He continued to win until he became the winningest rider the sport of flat track had ever known, earning his 40th AMA Grand National victory at the Syracuse, New York, mile on September 8, 1985.

Youngest champion ever, winningest rider ever, that would be enough laurel for any rider to hang his helmet and leathers upon, but Springsteen was a rider unlike any other. Nearly a decade after his 1985 victory, Springsteen returned to the winner's circle by winning the Pomona, California, half mile on April 1, 1995.

Even more wins came after that, with the crowning moment coming in the twilight of his career when Springsteen earned a victory that eluded him longer than any other, at the legendary Springfield Mile in Illinois on May 29, 2000.

Springsteen eventually scaled back his flat track racing activity in favor of vintage road racing after the 2003 racing season, but he never quit completely. He always remained competitive and never lost favor with the sport's hard-core fans. He probably never will.