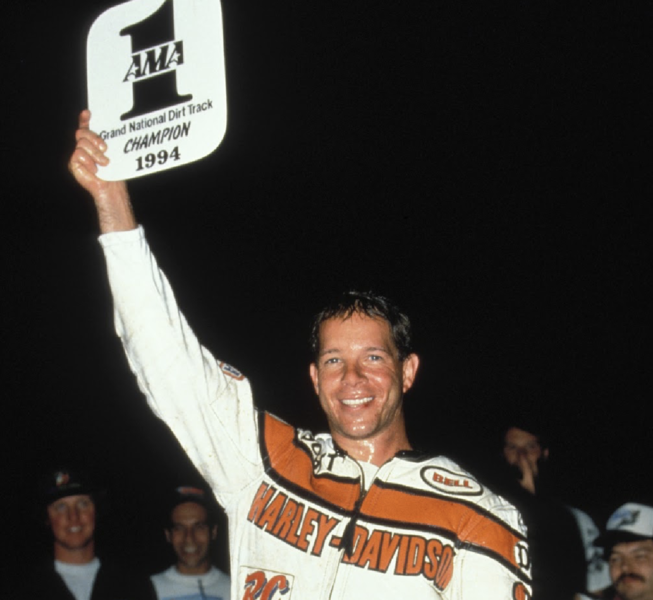 The State of Michigan has long been a breeding ground for motorcycle flat track champions. Paul Goldsmith, Bart Markel, Randy Goss, Jay Springsteen, are just a few. They are legends at the rutted fairground tracks, and the backyard speed dens that dot the state. Mention one and the arguments begin.

Who was the best?

He's being inducted into the Hall of Fame tonight: David Scott Parker.

He won while riding traditional lines; and he won in nontraditional fashion, making passes that left competitors and onlookers alike in awe. He won on tracks with a blue groove and was the absolute best on tracks with a cushion. He liked nothing better than to broad slide his Harley with the rear end trying to pass the front.

In 1976, at the age of 15, Scott was an amateur Flat Track National Champion.

In 1978 Scott won the Junior Professional National crown and earned enough points to be elevated to the rank of Expert.

At the first events of the 1979 season he failed to make the main. The ease with which he had sailed through the seasons prior meant nothing. Scott took a step back, and realized racing was no longer just fun and games. The pros were serious, and business was now part of the game.

With his first win as an expert, at DuQuoin, Illinois, Scott became the youngest rider to ever win a Grand National Championship event. By season's end Parker had scored 8 top ten finishes, garnered a pair of National Championship victories, finished ninth on the season, and was hands down Rookie Of The Year.

In 1981 Harley Davidson was looking for new blood to bolster their aging team. Parker was the rider of choice. As a factory rider Scott won races while thrilling flat track fans with his trademark style of riding. Wide open, go for broke, take the high line, skim the hay bales, throw some dirt, and make the pass. Over the next few years Parker won races and steadily moved up the ranking ladder. In 1988 he won four of the last five nationals to win the championship crown. He won again in 1989, '90 and '91 to match the long-standing record held by Carroll Resweber of four consecutive championships. In the process Parker passed fellow Flint native Jay Springsteen as the all time win leader in Grand National history with his 41st career victory.

1994 was the beginning of another record setting run. This time he made it five in a row. During the five year run, Parker scored an amazing 39 National wins.

With nine National Championships and a total of 91 National event wins, Parker announced 1999 would be his final season. The fun and excitement of racing was wearing thin. He had accomplished more than he had thought possible in the sport and he didn't want fans to see him as a struggling worn out racer. To be sure his retirement would be clean with no regrets, Scott rode five times in the year 2000 finishing his career with a win at his favorite track, Springfield.

When Parker hung up his steel shoe for the final time, he hung with it records that probably will never be broken. Nine National Championships including five in a row, and 94 championship wins. Three times he was named Athlete of the Year by the American Motorcyclist Association.

With his wife Wanda and two children, Ashley and Austin, Scott still resides in the Flint area.

Scott Parker -- the best from the State of Michigan and arguably the best ever in the history of Grand National Flat Track racing.