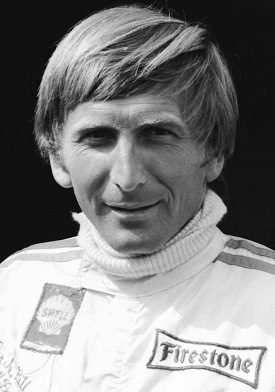 Derek Bell is the most successful endurance racing driver in the history of British motor sport, winning five times at Le Mans and being garlanded as the World Endurance Champion driver in 1985 and in 1986. Icing the cake, he was made a Member of the British Empire in 1987, an anachronistic title, maybe, but a signal honor awarded by the Queen, Bell's citation for services to motor sport.

Derek Bell is as well known in America as in Europe, with no fewer than 16 victories to his credit in the IMSA Camel GT Championship, all bar one shared with the legendary Al Holbert at the wheel of their Löwenbrau Porsche 962. Indeed he aided Holbert to his IMSA driver championships in 1985 and 1986, a period which marks the high point in Bell's illustrious career. He also won 16 World Championship races in the factory's Rothmans-Porsches, making him the most successful driver of the 956 and 962 models with 32 victories from 144 starts.

Bell's racing career began in 1963 when, at the age of 22, he paid for a session at the Jim Russell Racing School at Snetterton, Norfolk. Unusually, Russell marked him out as a potential champion and with financial backing from his step-father, Bernard Hender, Bell worked his way through the ranks of Formula 3 and Formula 2, with considerable success that led to a "golden ticket", a telegram from Enzo Ferrari to drive a factory car in the 1968 Monza Lotteria.

Elation at putting the Ferrari on pole position turned to dismay as he was involved in a pile-up at the Parabolica, but still a contract was offered for 1969. This included two Formula One starts, at the Italian and US Grands Prix, though he finished neither on account of mechanical failures.

Bell's career then steered towards sports cars, first with Ferrari in 1970 followed by an invitation to join the Gulf Porsche team in 1971, as Jo Siffert's co-driver. They won their first race, the Buenos Aires 1,000 Kms, but the Englishman reckons his best race was at Spa, where he put the Porsche on pole position at an average of 160 mph, and had to obey team orders to finish a close second to Pedro Rodriguez's Porsche.

He drove for the Gulf Mirage team for the next three seasons, his car not a match for the Ferrari and Matra factory teams. With Mike Hailwood, he won the Spa 1,000 Kms in 1973 and with Jacky Ickx, his first Le Mans victory in 1975.

Factory drives followed, for the Autodelta Alfa Romeo team, then the Renault factory's Le Mans bids in 1977 and 1978, though not in the winning car. He was introduced to Al Holbert at Le Mans in 1980, when they shared a factory entered Porsche 924 Carrera GTR, and Bell was reunited with Porsche's legendary race engineer Norbert Singer.

This was the beginning of a superb eight-year relationship for Bell, with the Porsche factory and with Holbert's IMSA team. Uniquely he won the Daytona and Le Mans 24-Hour races in 1986 and again in 1987, unbeaten in 96 hours, an achievement which will almost certainly never be repeated. Now retired, he was the consummate sports car driver, fast and supremely able to keep his cars out of trouble. He is proud to claim that in 25 starts at Le Mans, he has never put so much as a scratch on his cars, never lost a position due to driver error.

Derek Bell has been associated with Bentley since 2000 as team consultant, and is now Brand Ambassador for Bentley Motors.