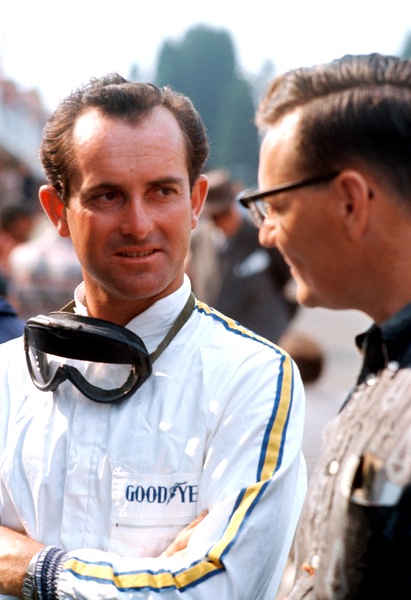 In 1965, Bondurant and his co-drivers won seven of 10 races in the World Manufacturers Championship series behind the wheel of a Carroll Shelby Cobra Daytona Coupe. That feat earned Ford the GT class title, the first international championship ever for an American automaker.

Had drivers as well as cars earned points, Bondurant would have been the individual world champion.

Bondurant was born in 1933 at Evanston, IL and grew up in Los Angeles, where he raced motorcycles and sports cars. He made his breakthrough by winning 18 of 20 races in a 1957 Corvette. He says he was especially motivated to win because of his deal with his mechanic, who didn't charge Bondurant for maintenance after races when he won.

In 1959 he was West Coast "B" Production champion and Corvette driver of the year.

He was working as a helicopter pilot when he was recruited by Carroll Shelby to race Cobras in 1963. The following year Bondurant and Dan Gurney drove one of Shelby's new Cobra Daytona Coupe's to a fourth-place finish overall and a GT-class victory in the 24 Hours of Le Mans.

In addition to driving to the world championship in 1965, Bondurant was part of Ford's GT-40 assault on Le Mans that year. In 1966 he raced sports cars for Ferrari and also posted a fourth-place in the important 1,000-kilometer race at the Nurburgring in a drive for Porsche.

In 1967, Bondurant was racing in the Can-Am series when his car suffered a broken steering arm while racing at 150 mph on the Watkins Glen track, somersaulting eight times and high into the air. "I knew I was in trouble when I saw the tops of the trees," Bondurant said.

Bondurant was so severely injured that doctors told him there was only a one percent chance he would ever walk again.

In addition to racing sports cars, Bondurant drove in nine Formula One races. He drove for the Ferrari factory team in the U.S. Grand Prix at the end of the 1965 season, finished fourth at Monaco in 1966 with BRM and also drove for Gurney's team.

In 1966 Bondurant had helped coach James Garner for his role in the movie Grand Prix. To speed his own recuperation after his accident, Bondurant decided to open a driving school, which he did on Valentine's Day in 1968 with three Datsuns and a Formula Vee racer. Among his first students were Paul Newman and Robert Wagner, who were preparing for the Indy-racing movie Winning.

Thirty-five years later, more than 85,000 people have gone through the Bob Bondurant School of High Performance Driving, including drivers who have gone on to win Indianapolis and NASCAR championships.

But there is much more to Bondurant's school than the preparation of future racing champions. The curriculum includes courses in safe highway driving. There are courses in skid control and accident avoidance and special programs to instill good habits in new, teenaged drivers.