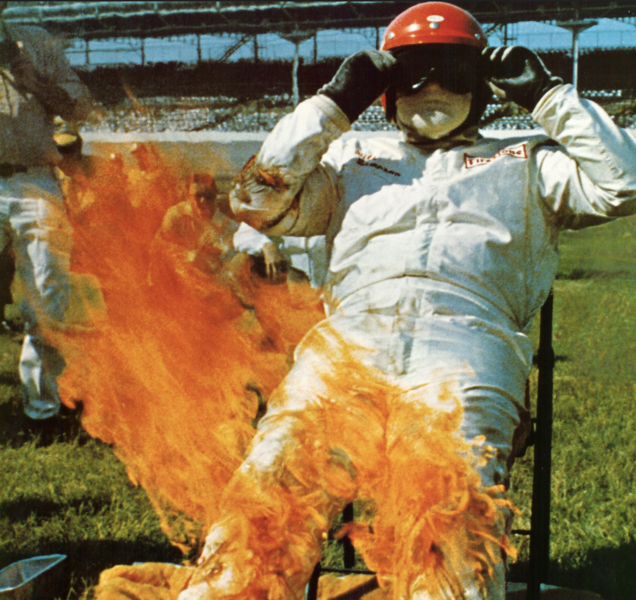 When 18-year-old Bill Simpson crashed his dragster in 1958, it may have been the most fortuitous wreck in the history of automobile racing.

That incident left Simpson in a California hospital bed with two badly broken arms, assorted bruises and plenty of recovery time to daydream.

"Until then, I was like most drivers," Simpson recalls. "The only time I thought about safety was after I'd been hurt. This time, I was hurt bad enough to do a lot of thinking."

That was when auto racing got lucky.

A handful of drag racers had experimented with war-surplus parachutes as a means of slowing their cars. Simpson went further, researching fabrics and designing some of the sport's first purpose-built parachutes. He hung out his shingle as Simpson Drag Chutes.

NHRA legend Tom McEwen says, "I remember Bill in that garage, sitting at his sewing machine. I didn't know if he was going to be successful, but I was hoping really hard that he was going to keep going, because we needed a guy like him who was interested in safety."

Simpson kept going. Over time he diversified his line, making everything from gloves and shoes to helmets and restraint systems. Perhaps his biggest contribution came in 1967 when, through NASA astronaut and racing buff Pete Conrad, he was introduced to a temperature-resistant DuPont fabric called Nomex. Simpson used it to produce what became racings first true "fire suit," and that May he took a prototype example to the Indianapolis Motor Speedway, where it was an instant sensation.

"Come race day," he says, "there were something like 30 Nomex suits on the grid, and they all said 'Simpson' on the sleeve. I was pretty proud of that. Still am."

Since that time, he has been a leading light maybe the leading light in the racing safety business, marketing his products for decades under an eponymous label and more recently via his new concern, Impact Racing.

For much of that time he lived a dual life, developing safety equipment while continuing to race in a variety of categories: dragsters gave way to SCCA formula cars, and by the end of the '60s Simpson was a fixture on the Indy car circuit. In 1974 he experienced "the highlight of my race-driving life" when he qualified for his only Indianapolis 500 (he started 20th, finished 13th). But his driving days came to an end in 1977, on an Indy practice lap, when he found himself "thinking about a phone call I was supposed to make, and about some material I needed to purchase." The lapse in concentration so unnerved Simpson that he climbed from the cockpit and announced, "You will never see me sit in one of these things again."

Although Simpson has had many honors bestowed on him over the years, the endorsements he treasures most come from the racers he has known and helped, and they surely number in the thousands. Says three-time Indianapolis 500 winner Johnny Rutherford, "If there was ever a humanitarian award for all of motorsports, Simpson would certainly be one of the recipients."

His devotion to racing safety may have started with a sudden thump, but Bill Simpson's impact on motorsports will last forever.