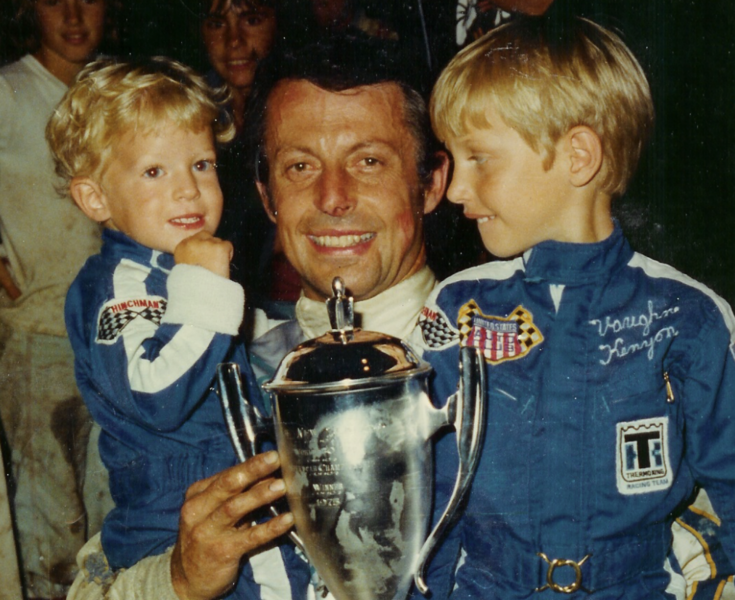 They call him Miraculous Mel, and with good reason.

Born in Illinois and raised in Davenport, IA, but long since a resident of Lebanon, IN, Kenyon is unquestionably the most successful driver in the nearly 50-year history of United States Auto Club midget car competition and many consider him to be midget car racing's greatest driver ever.

In addition to a record seven USAC National midget titles, Kenyon also was runner-up eight times. In the 27 seasons between 1963 and 1988, he placed in the top five of the final standings an amazing 21 times. His 111 features wins -- also a record -- have been backed up by 131 seconds, 107 thirds, 81 fourths and 69 fifths for a total of 419 finishes among the top five, not to mention a grand total of 688 among the top 10. And this is in USAC National competition alone. It does not include numerous successes in a variety of regional and sectional events and with other sanctioning bodies, including NAMARS, where he was the National champion in 1995, '96 and '97.

By his own calculations, his feature victories in all of midget racing, including in Australia and New Zealand, have topped 380, and friends will point out that many of his second-place finishes have come as the result of being beaten by cars he and his brother, Don, prepared for other people.

Although Kenyon very rarely ventured into sprint car racing, he did compete in 65 USAC National Championship events and participated in the Indianapolis 500 eight times, placing third in 1968 -- behind Bobby Unser and Dan Gurney -- plus fourth in 1969 and 1973, and fifth in 1966.

The truly remarkable thing about him is that the majority of his success was accomplished after overcoming an adversity that would have stopped most people. A series of operations at the San Antonio Burn Center, following a fiery accident in a Championship car at Langhorne in June of 1965, left him missing virtually all of the fingers on his left hand. But he wasn't through yet. Together with his brother and his father, he designed a special glove in which a rubber grommet was sewn into the palm. This was to fit over a stud on the steering wheel so that he could grab the wheel with his right hand and steer with the palm of his left hand.

He made his return in the spring of 1966 and it was as if he had never been away, scoring a dozen finishes of either first or second and placing second in the final point standings.

Perhaps even more remarkable than all of this was the fact that he continued to do his own engine work, his third place finish at Indianapolis in 1968 coming with a normally aspirated Offenhauser engine he routinely tore down and put back together strictly by himself.

A man of strong religious conviction, much of his time in the 1990s was spent caring for his virtually comatose wife, now deceased, who had suffered a major head injury in a bicycle riding accident. But his conviction and his inspirational easy-going manner never wavered and rivals were confounded when, even as he was celebrating his 70th birthday on April 15, 2003, Mel Kenyon was getting ready to go racing again.