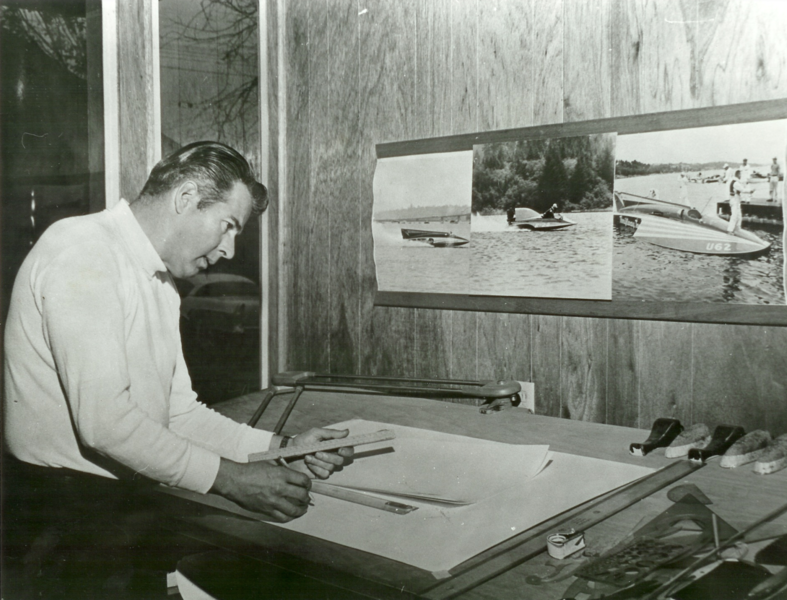 If one name is to be singled out above all others as having exerted the greatest influence on post-World War II unlimited hydroplane racing, that name unquestionably is Tudor Owen ("Ted") Jones from Seattle, WA.

Jones, who passed away on Jan. 9, 2000 at the age of 90, started racing boats in 1927. He designed and drove the Slo-Mo-Shun IV, the first prop-riding thunderboat to run successfully. He piloted the IV to victory in all three heats of the 1950 APBA Gold Cup on the Detroit River.

Jones and the Slo-Mo-Shun IV represented the Seattle Yacht Club and thus were allowed to defend the cup on home waters in 1951. This was the start of a hydroplane tradition on Seattle's Lake Washington that continues to this day.

The world didn't know much about Jones prior to June 26, 1950, but he took care of that in his own inimitable way. That was when Slo-Mo IV set a mile straightaway record of 160.323 miles per hour on Lake Washington near Sand Point, which raised the former standard by nearly 20 mph.

With owner Stan Sayres driving and Jones along side as riding mechanic, the IV toppled Sir Malcolm Campbell's world mark of 141.740, established in England in 1939. The era of the three-point suspension design of hydroplane had most assuredly arrived.

Slo-Mo-Shun IV was not the first unlimited hydroplane to "propride" on a semi-submerged propeller, but she was the first to reap championship results in the application of the concept.

After winning the Gold Cup, Slo-Mo-Shun IV went on to claim the Harmsworth International Trophy, also at Detroit, with Lou Fageol driving. The IV thus became the first boat to win both the Harmsworth and the Gold Cup races, in addition to setting a world straightaway record, during the same calendar year since Gar Wood's Miss America in 1920.

Jones' second unlimited, the Slo-Mo-Shun V of 1951, won the Gold Cup and the Seafair Trophy that year.

Following the 1951 season, Jones left the Slo-Mo-Shun team and pretty much distanced himself from racing for the next three years.

The third Miss Thriftway hull proved to be the winningest of them all with 14 victories between 1960 and 1963.

In 1958, Jones designed the Miss Bardahl, but rather than take the boat to established builders Anchor Jensen or Les Staudacher, he selected his 26-year-old son, Ron Jones, as the builder. The young Jones also has had success in designing and building unlimiteds.

Jones' last two unlimiteds were the 1960 Miss Burien and the 1962 Miss Bardahl. The Burien was still in competition 20 years later as Savair's Probe.

By 1965, Jones was completely out of the boat racing business.