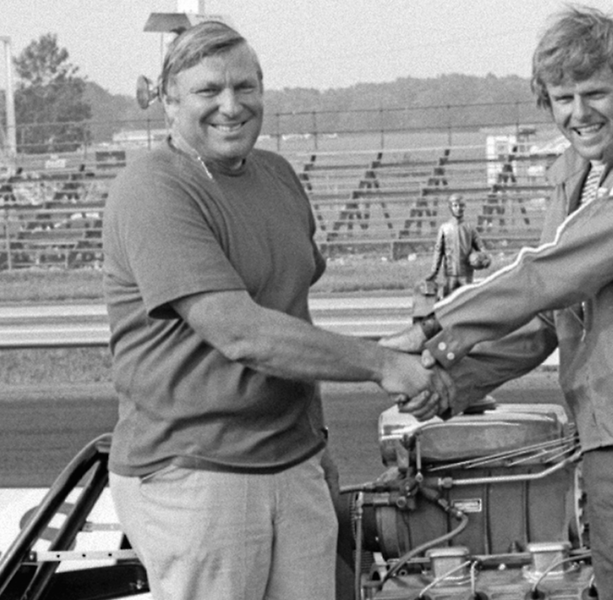 Although he is being inducted into the Motorsports Hall of Fame in the drag racing category, many forms of racing have benefited from the engineering, machining skills, and enthusiasm of Ed Donovan.

Born in Los Angeles in 1928, Donovan was interested in engines from childhood. When drag racing became a legitimate activity in 1950, it didn't take him long to become involved. Always a fan of four cylinder engines, he and a buddy raced a roadster at Santa Ana powered by a hopped up Model B Ford.

After a tour of duty in the Army, Donovan's interest in engines took him to the wilds of Alaska where he maintained steam engines for the government. When he returned to LA, he became a machinist at Meyer and Drake Racing Engines, where the mighty Offenhausers were produced. His love of four-bangers and his admiration for his mentors Ed Winfield and design genius Leo Goossen were certainly reinforced by the time he spent at the Gage Avenue plant.

Donovan's avocation of drag racing led to a new career, which started in the evenings at his home where he began manufacturing stainless steel valves that were far better able to withstand the rigors of nitro-methane fuel racing. Eventually, the success of his products led him to leave Meyer and Drake. In 1962, he and partner Frank Startup opened Donovan Engineering in Inglewood, CA.

Always one to identify a need and create a product to fill it, Donovan's product line quickly expanded to include the first two disc "slipper clutch," forged rocker arms and aluminum valve covers for 392 Chryslers, and driveline components such as spider shafts, axles, driveshaft couplers and one-piece bell housings or "clutch cans."

Donovan did his own research and development on a series of dragsters he raced with various partners. His drivers included such stars as Bobby Tapia, Wayne King and fellow Hall of Famer Tom McEwen. It was Donovan who after a particularly rewarding match race victory over Don "The Snake" Prudhomme, recalled Kipling's "Jungle Book" and gave McEwen the "Mongoose" nickname that would become his trademark throughout his career.

When more-efficient superchargers and fuel systems began to take their toll with regularity on the junkyard Hemi Chryslers, it was Donovan who came up with an answer. In 1971 he developed the Donovan 417, an aluminum block based on the 392 Chrysler but with features designed to withstand the rigors of fuel racing. In its debut, the first 417 powered John Wiebe's (by then) obsolete front engine dragster to an Ontario strip record, and runner-up honors at the '71 NHRA Supernationals.

In 1978 Ed developed his aluminum 350 small-block Chevrolet that has become a staple of sprint car racing. In 1985 an aluminum big-block Chevy followed, which is used extensively in boat racing and sportsman drag racing categories. During the recent Operation Iraqi Freedom, Donovan employees were thrilled to see television coverage of U.S. Navy Seals raiding an offshore oil-drilling platform in a boat powered by a big block Donovan.

Since his untimely passing in 1989, Ed's widow Kathy has continued to successfully operate Donovan Engineering.