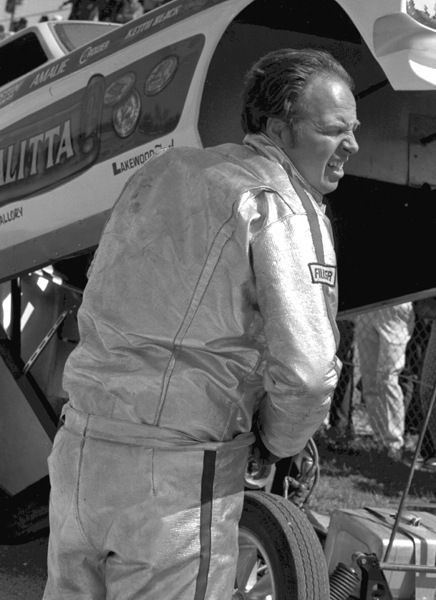 Accomplished businessman, pilot, and drag racer, Michigan's Conrad "Connie" Kalitta would rather come up with a new path to success than trod the heavily worn path of his competitors. His methodology has achieved winning results far more often than not.

In 1967, he became the only Top Fuel driver to have won every major drag racing associations' season-opening event by winning Winter Nationals staged by AHRA, NHRA and NASCAR. Kalitta used the proceeds from those victories to buy his first airplane. That purchase marked a turning point in his life. In the business world, Kalitta has earned a reputation for the professionalism of his air operations. No less than eight companies worldwide bear the distinctive Kalitta touch, maintaining and flying air transports, freight haulers and air ambulances.

After his initial successes in Top Fuel with a string of "Bounty Hunter"-tagged cars, he found less and less time to race because of his growing aircraft operations. The second time he dropped out of driving, he embarked upon a tumultuous relationship as a crew chief for Hall of Famer Shirley Muldowney which culminated in her first NHRA Winston World Championship in 1977.

The following season Kalitta returned to active Top Fuel competition. Five victories and more strong finishes resulted in his being crowned IHRA World Champion in 1979 and 1982. Kalitta has appeared in NHRA National Event Final Rounds 16 times during his colorful career, winning eight times. Seven times in the 1980s Kalitta finished in the prestigious NHRA Top 10 standings. As the decade came to a close, Kalitta earned special recognition for becoming the first driver to top 290 miles per hour in the quarter mile. By topping out at 291.54 miles per hour, Kalitta didn't just touch the 290 barrier, he knocked it over.

Kalitta has always been outspoken and controversial, but the blustering of his early career has all but disappeared, having been replaced by carefully researched, thought provoking commentary. Evidence of racing maturity is found in the way Kalitta supports his son Scott's efforts as co-driver on his Top Fuel team. While his son is free to pursue the tuning combining suggested by his crew chief, the senior Kalitta remains his own man, often preferring to experiment with original set-ups instead of following the easy route to the winner's circle.

Beyond innovation, this inductee's relentless lifelong quest has been for independence. Rugged individualist Connie Kalitta has captured a big piece of that elusive goal and has fiercely defended it over a long and illustrious career.