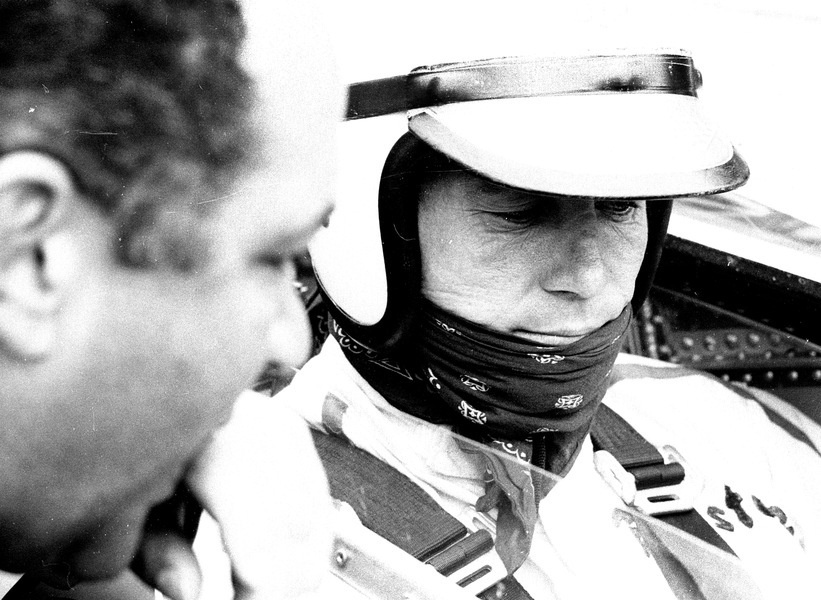 Rufus Parnelli Jones skyrocketed across the American racing horizon in the 1960's as a dominant force in Indy Cars. Later, the power of his presence helped lift the infant sport of off-road racing to national prominence.

Jones was the personification of competitive spirit. His single-minded determination ensured success in any endeavor. He chose racing.

Winning the first two USAC National Sprint Car Championships in 1961 and 1962, Parnelli earned a special place in racing history with his memorable duels against drivers like Jim Hurtubise and A. J. Foyt. A keen observer of technique, Jones went to Indianapolis in 1960 not as a driver but as a student. He returned in 1961 to become Rookie of the Year. In 1962, he became the first driver to crack the 150 mph barrier at the Brickyard. Starting from the pole, he led 123 of the first 125 laps until failing brakes forced him to fall back to 7th at the checkered flag.

Tough as ever, and seasoned with bitter disappointment, Jones returned to Indy not to be denied. When he took to the Speedway for the 1963 500 in his J. C. Agajanian-owned "Old Calhoun" Roadster, he was invincible. Leading most of the race, after starting on the pole, competitors complained when a crack in his oil tank began to spray the slippery liquid onto the track. Jones was allowed to continue to his journey to victory lane only when Agajanian convinced officials, who were considering the black flag, that the leak had ceased.

Throughout his latter career and up to the date of his induction, Jones has applied his intrepid competitive drive to off-road racing. He has won the treacherous and grueling Baja 500 five times and the Baja 1000 three times. Mellowed in temperament but not in spirit. Jones still drives off-roaders and expends considerable energy guiding his racing sons and several successful businesses. He has conquered nearly every form of auto racing, and even carried a fledgling branch of the sport on his famous shoulders for a while until it could stand on its own. Few drivers have had broader impact. Few are more deserving of induction into the Motorsports Hall of Fame.