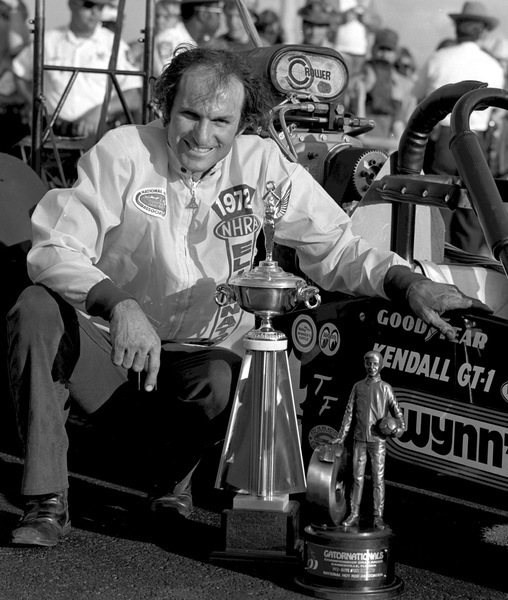 For the past 25 years, there has been one king of drag racing. "Big Daddy" Don Garlits, born January 14, 1932, is that man, and one of the inaugural inductees into the Motorsports Hall of Fame.

Garlit's entire career has been directed to making top fuel dragsters go faster and quicker. He is as much revered for the technical innovation he has brought to the sport of drag racing as for the national championship events he has won. And at last count, he had won 53 NHRA top fuel national championship events--more than any other drag racer in history. What's more, he was NHRA World Champion in 1975, 1985 and 1986. He also compiled a total of 77 wins in national events and 14 World Championships in AHRA and IHRA competition. If Garlits shows up at a race, he is immediately the driver to beat.

Garlit's rear-engined dragster revolutionized drag racing. In 1970, a transmission exploded and Garlits lost part of a foot. Concerned with the increasing difficulty of safely piloting the ever faster dragsters, Garlits designed himself a rear-engined car where the driver sat in front of the engine. If a mishap occurred and the engine blew, the driver was protected from the flying debris and fire. The weight of the engine closer to the rear tires helped traction, too, and Garlits pioneered the use of a rear airfoil to keep the rear wheels down at higher and higher speeds.

Garlits was the first driver ever to accelerate to 200 mph from a standing start in a quarter mile, and also the first to run 250 mph and 270 mph.

Today, Garlits is just as apt to be found in his Museum of Drag Racing in Ocala, Florida as on a dragstrip.