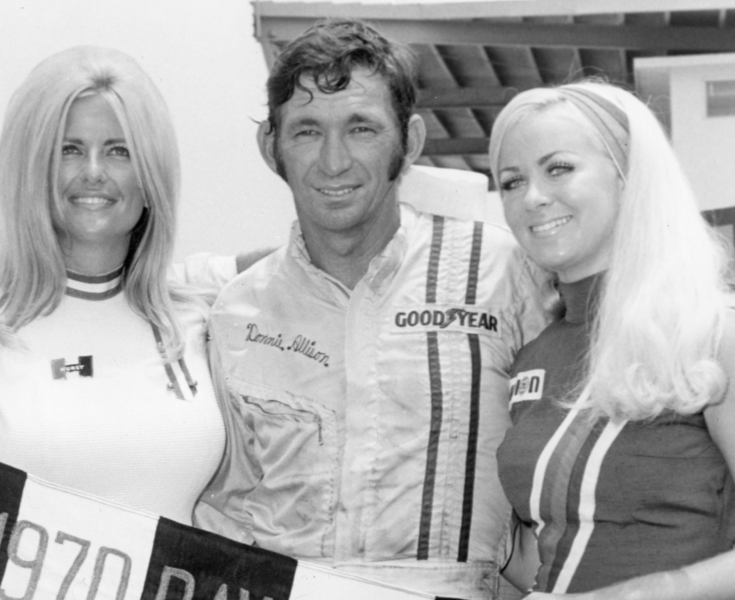 Donnie Allison never planned to be a race driver. Even when older brother Bobby started racing and winning races, Donnie never really caught the bug. He was just happy for Bobby and the success he had.

But when Bobby made the claim that Donnie could never be a race driver, well, that was the wrong thing to say. Donnie was determined to prove Bobby wrong. And it didn't take long for Donnie to accomplish his mission.

Donnie, too, started winning races on a regular basis around their Hialeah, Florida home.

Shortly afterwards, Bobby headed for Alabama because you could race five, six, seven nights a week in and around Birmingham. It wasn't long before Donnie decided to do the same. The Allisons decided to base their racing operations in Hueytown where they joined forces with Red Farmer to form what became known as "The Alabama Gang."

Their rivals on the short tracks around the South hated to see The Alabama Gang roll into town because it meant one of the three of them would probably win the race that night.

During this period of his Hall of Fame racing career, Donnie would win more than 500 races.

In 1968, Donnie got his big break when famed mechanic Banjo Matthews called to see if Donnie wanted to go Grand National (later Winston Cup and now Sprint Cup) racing. Donnie still says Banjo was the "best thing that ever happened to me. And he was the smartest man I have ever been around when it comes to Winston Cup racing."

The Allison-Matthews combo had its best season in 1970 when Donnie won the World 600 at Charlotte Motor Speedway, the Firecracker 400 at Daytona International Speedway and the Southeastern 500 at Bristol International Raceway. In 19 starts that season, Donnie finished in the top five a remarkable 10 times.

That same year A.J. Foyt asked Donnie to drive one of his cars in the Indianapolis 500. Donnie not only was named the Rookie of the Race at Indy, he finished fourth in the 500.

Donnie finished sixth in the 1971 Indianapolis 500, again driving for Foyt.

But he was part of its most famous "fight" in '79 when he and Cale Yarborough put on one of the greatest duels ever at Daytona. During the last 25 laps, they swapped the lead repeatedly. Donnie was out front as they got the white flag. Yarborough dove underneath Allison as they raced down the backstretch. They came together several times before spinning out as they raced into the third turn. Each one blamed the other for the confrontation. A few minutes later Bobby parked his car to see how his brother was. The three of them ended up exchanging blows to the surprise of a national television audience. It was a fight that people still talk about today.

Donnie would go on to win 10 Cup races in his career which all but ended in a savage crash at Charlotte in 1981. On lap 146 of the 600, a cut tire sent Allison spinning into the turn four wall. As he came back across the track, Dick Brooks slammed into him. Allison was knocked unconscious and suffered a broken leg, five broken ribs, a fractured right shoulder blade and cheekbone. He also had a collapsed lung. Allison competed in only 13 races after the accident.

Donnie never ran a full schedule while competing on the Winston Cup Series as the teams that he drove for preferred to run just the "super speedways." As a result, he never really had a chance to win a series championship, one of the biggest regrets of his Hall of Fame career.