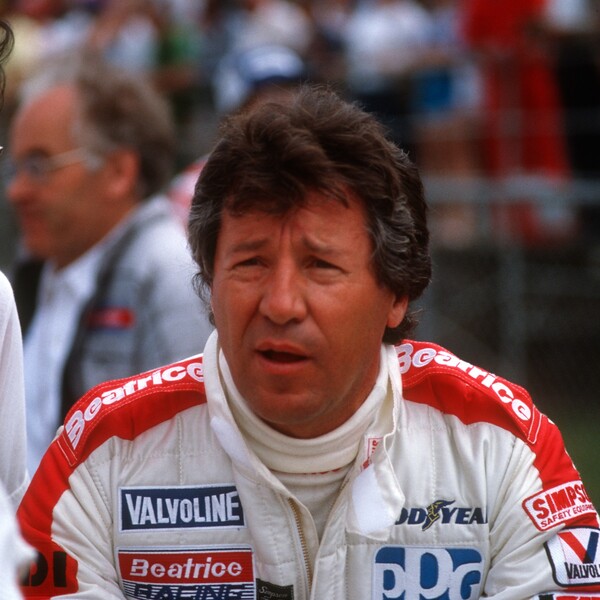 Mario Andretti's life story is the stuff Hollywood films are made of. From his birth in the farm country of northern Italy, to living with his family in a displaced persons camp after World War II, to arriving in the U.S. and becoming one of the best-known figures in motorsports as a world driving champion, Mario Andretti truly lives the American Dream. The racing bug bit in 1954 when Andretti attended his first race the famous Mille Miglia, the tortuous thousand-mile course that snaked from Brescia in north central Italy down to Rome and then back to Brescia. The 14-year old spectator was captivated by the driving skill of the great Alberto Ascari - a man who had the strongest influence on his life, even though the two never met.

When Andretti's family moved to Nazareth, Pennsylvania, he started racing modified stock cars and took his first U.S. win in a Hudson Hornet in 1958. It was the start of an impressive racing career that would span three decades and include over 100 major wins in virtually every racing venue - midgets, Indy cars, Formula One, sprint cars, sports cars, dirt track cars, and even drag racing where, in 1968, he drove a Ford Mustang to a match race win.

Mario Andretti cast a giant shadow in his unique accomplishments on the track. Until 1989, he was the only driver to win a Formula One World Championship and an Indy Car National Title. In Indy Cars, he owns 51 career victories, 4 National Championships, and more pole positions than anyone else.

Victory lane is almost a second home to Mario, as he's garnered the checkered flag in events such as the Indy 500, Daytona 500, the IROC Championship, multiple Sebring 12-hour events and 12 Formula One Grand Prix.

Andretti's career took another dimension when his sons Michael and Jeffrey entered the racing fraternity and the Andretti winning ways became a family affair - both in cooperation and competition - with each other. For several years Mario and Michael joined forces to become Indy's first father-son team.

His long list of major championships, awards and honors, and the versatility he displayed in achieving them, make Mario Andretti deserving of his rank at the top of the list of all-time greats of the sport.