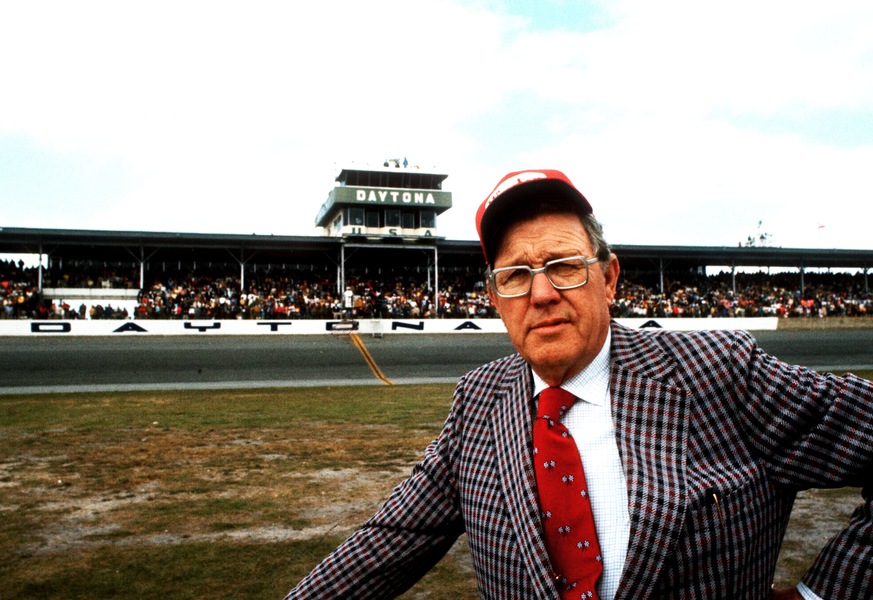 Bill France, founder and president of the National Association for Stock Car Automobile Racing (NASCAR), more than anyone else is responsible for the national prominence and popularity of stock car racing in the United Dates. A "promoter's promoter," and the world's foremost motorsports director, Bill was also a visionary, conceiving the ideas for the Daytona International Speedway and Talladega Superspeedway, building and serving as president of both facilities.

France got his first taste of stock car racing in 1936 when he entered a race sponsored by the city of Daytona Beach. The event was run over the old beach and road course, and he finished 5th. But he fared better than the race promoters did. Two years later, France took over promoting the same event and put it into the black.

Successful in promoting the annual beach races after the war, France expanded his operation by promoting races in Georgia and the Carolinas. Other promoters, from Maine to Miami, had tried conducting beach races and failed, due to the many uncontrollable factors involved in that type of sport. Only France developed the knowhow to make these races work.

A big problem at the time was the seedy reputation associated with stock car races. Many were viewed as less-than-honest promoters who did not deliver what was promised - to the racers or spectators. France changed all that by Forming NASCAR in the face of a good deal of scoffing and even outright hostility. When the word spread that NASCAR guaranteed to both spectators and drivers that everything promised would be delivered, participation and attendance at France's events surged, and the sport took on a new mantle of respectability.

France's self-determination, coupled with one of the most pleasing personalities in professional sports, allowed him to unlock doors and lead NASCAR and stock car racing into the modern age.