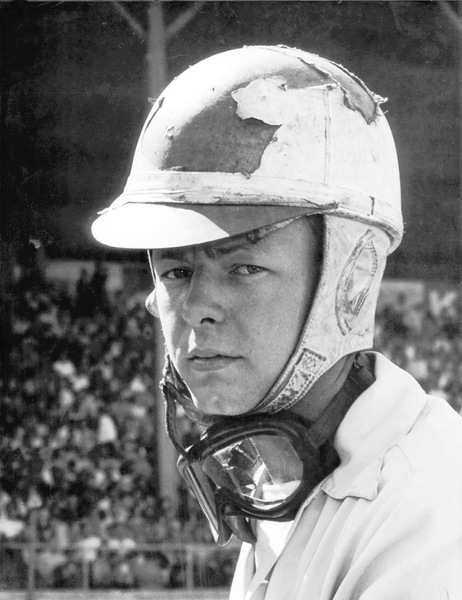 Jim Rathmann, winner of the 1960 Indianapolis 500, the 1957 Monza (Italy) 500, and what for many years was the fastest National Championship race ever held (Daytona, 1959), always appeared to be poker-faced and not particularly moved in victory shots. Did this fellow even like racing? He'd stand in the cockpit with a wreath around his neck, grime all over his face, and his helmet still in place, but with the unfastened straps dangling lazily around his chin. A plea from the battery of photographers for some sort of acknowledgement would result in the bare trace of a smile, and a wave of one hand at approximately chest level.

So was he just one of those iron "he-men" who simply never showed emotion, or was he even bored by racing and in it merely to make a living? In truth, Jim Rathmann loved racing. He was just a matter-of-fact individual who had been plying his trade since the age of 16, and had been involved in business even before that, earning a living in the flourishing hot-rod business while still in high school. As competitive as anybody on a race track (particularly those with paved surfaces), the off-track version of Jim Rathmann was (and is) actually a fun-loving, good-natured person, who has a twinkle in his eye, thoroughly enjoys a practical joke, and possesses a most infectious giggle when telling an amusing story. And he certainly has plenty of those.

Born in Los Angeles as Richard Rathmann, he was just 16 years old when he decided he wanted to start racing hot rods along with his friends, one of whom was an even younger Troy Ruttman. While Ruttman was able to get his mother to alter his birth certificate, Rathmann dealt with the "underage" problem by swapping identities with his brother James, who was two and a half years older. Thus Richard became "Jim," and James (the 1958 Indianapolis 500 pole-sitter) became "Dick."

Jim (as we know him) competed in 14 Indianapolis 500-Mile Races, finishing as runner-up three times (1952, 1957 and 1959) before finally triumphing in 1960 in what many feel was the greatest Indianapolis 500 ever. It certainly featured the greatest sustained two-man battle ever witnessed at the famed track, as during the entire second half of the "500" Rathmann and defending winner Rodger Ward were never any more than a few feet apart from each other, swapping the lead a total of 14 times. It was only when Ward was forced to slow due to a worn tire with three laps remaining that Rathmann was finally able to claim the victory which had eluded him so many times before.

Three times the champion of the Midwest track roadster circuit?and one of the stars of Andy Granatelli's Hurricane Hot Rod Association?Rathmann was the third-ranking driver in the 1955 AAA National Stock Car standings. In 1957, he almost won the USAC National Championship title. He had ceased competing on dirt tracks by this time, but with a second-place finish at Indianapolis and a first in the Milwaukee 200, he found himself leading in points. He showed up for the final two races of the year, on the dirt tracks of Sacramento and Phoenix, but was unable to hold off the onslaught by dirt-track specialist Jimmy Bryan.

In 1958, Rathmann won all three legs of the Monza 500, posting an amazing overall average of 166.722 mph, while in the first (and only) appearance of the USAC championship cars at the brand-new Daytona International Speedway in April 1959, he completed the 100 miles in just over 35 minutes to average an incredible 170.261 mph.

Set up with a Cadillac and Chevrolet dealership in Melbourne, Florida, Rathmann resisted an agreed-upon retirement from racing for several years until he was finally "forced" to do so in the spring of 1964. By that time, he had climbed to third in the all-time laps-completed category at Indianapolis, with only Cliff Bergere and Mauri Rose having traveled a greater distance.

Close friends of several of the original U. S. astronauts, Rathmann briefly participated as a "500" car entrant in 1966 and 1967, "GCR Racing" having comprised Gus Grissom and Gordon Cooper, with Jim being the "R."

A perennial visitor to the Indianapolis Motor Speedway each May, he served as the pace car driver for the "500" six times between 1969 and 1982, and has continued to be an outstanding ambassador for the sport.