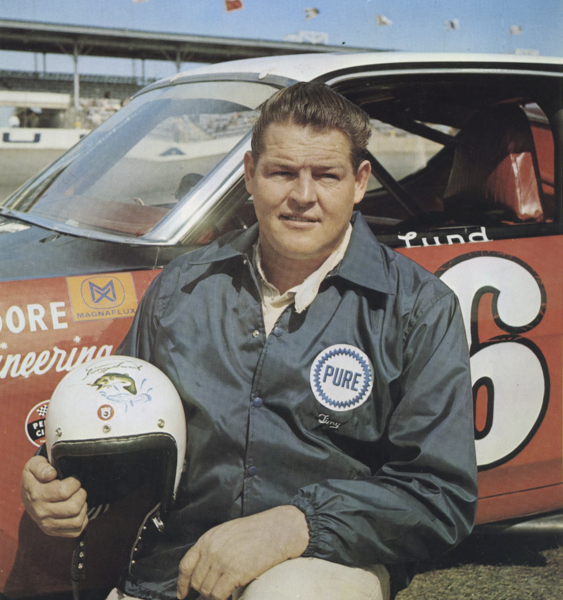 DeWayne "Tiny" Lund — the nickname belied his actual 6'5", 270 lb. statistics. He was known as NASCAR's original "gentle giant." He came south to race on America's premier stock car circuit from his native Iowa in 1955 and picked up a ride in "Speedy" Bill Smith's new Chevrolet for a race at the treacherous 1.5-mile high-banked dirt track in LeHi, AR called Memphis-Arkansas Speedway.

During the event Lund's car hooked a rut and flipped as his seatbelt broke. He was thrown out of the car and onto the track, suffering a broken arm, cuts, scrapes and bruises. But the real wounds belonged to his sponsor — Rupert Safety Belts!

Lund found work driving a second car for Lee Petty and others with little success until February of 1963. He arrived at Daytona International Speedway with no car to drive and 17 cents in his pocket when fate stepped in. Marvin Panch was one of the favorites to win the 1963 Daytona 500 as prime driver for the Wood Brothers. However, 10 days before the race, Panch was injured at Daytona when the sports car he was testing flipped and caught fire, trapping him inside. Lund and several others pulled Panch to safety. From his hospital bed Panch asked car owner Glen Wood to let Lund drive the car in the big race. Leonard Wood's superb chassis setup on the #21 Ford allowed the team to run the entire 500 miles on one set of tires and one less pit stop than their competitors.

Tiny Lund had won the biggest race of his career, going from rags to riches in what has become known as NASCAR's "Cinderella" story. Lund continued to drive for the Woods until Panch recuperated. But although Lund enjoyed the limelight of big-time racing, his first love was short track, late model racing on dirt speedways — a form in which he enjoyed much success and allowed him to spend more time at his beloved fish camp in Cross, SC.

Occasionally, opportunities would arise with car owners such as inductees Buck Baker and Bud Moore as well as Ray Fox and the famed Holman-Moody team. Later in his career, Tiny Lund excelled in NASCAR's Grand American Division, a series that featured Mustangs, Camaros and other smaller "pony cars." He won the championship in 1968, 1970 and 1971 and 41 of 109 races.

Lund returned to NASCAR's top series in 1975 to drive a Dodge Charger at Talladega for car owner A.J. King. On the seventh lap of the Talladega 500 Lund was involved in a multicar accident in which his racer was hit directly in the driver's door. Lund died of massive chest injuries in the infield hospital. His survivors included his widow Wanda and young son Chris.

In a NASCAR career that spanned over 20 years, Tiny Lund made 303 NASCAR premier series starts with five wins. He also started 24 NASCAR Convertible events, won the 1970 Daytona Permatex 300, three NASCAR Grand American titles and countless late model races on local dirt tracks. He was one of the most popular drivers in the sport with many comparing him to a jovial, overgrown kid full of fun and life.

McKim is one of the racing world's foremost historians. He was director of the International Speedway Corp's archives and recently retired as Historian of the NASCAR Hall of Fame. He co-authored the popular book "NASCAR Vault" in 2004 and is also an accomplished artist of historic auto racing scenes.