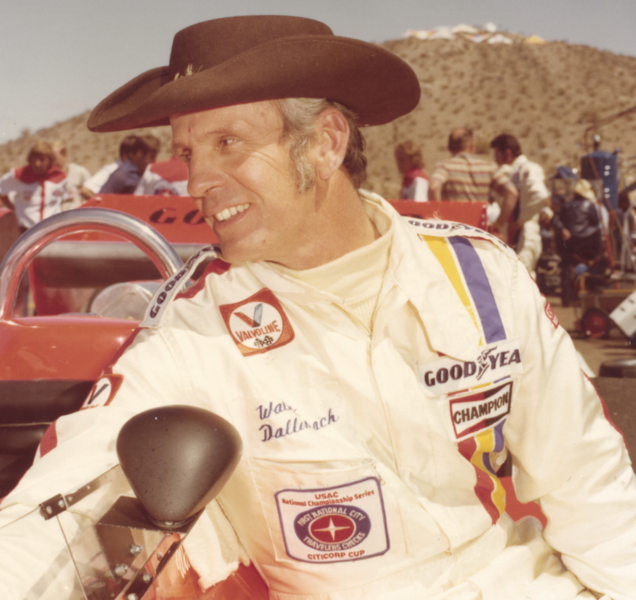 A humble, self-effacing man, Wally Dallenbach Sr. was a top Indy car driver who went on to establish himself by many estimates as the best chief steward in the history of American racing. A self-made racer from New Jersey, Dallenbach raced dragsters, stock cars, midgets and sprint cars before making his name as the winner of five Indy car races with inductee Pat Patrick's team in the mid-'70s, including the 1973 California 500. During this time Dallenbach moved west to Colorado and started the Colorado 500 motorcycle ride before retiring in 1980 to become CART's chief steward.

Over the following 20 years Dallenbach built a reputation as a cool-headed, even-handed steward who became a tremendous proponent of improving all aspects of safety in motor racing. With the help of doctors Steve Olvey and Terry Trammell and safety directors Steve Edwards and Lon Bromley, he developed the sport's most progressive, state-of-the-art safety and medical team.

And by working closely with the teams and car builders, Dallenbach and his group also influenced many improvements in car and cockpit construction, embracing better ways to absorb energy on impact. In 1976 Dallenbach started a rescue team at home in Basalt, Colorado. He conscripted 20 friends to take an EMT course, then bought an ambulance. After becoming CART's chief steward he applied those lessons to the sanctioning body and developed a trailblazing safety program complete with a traveling hospital, doctors and nurses.

"The big thing that I'm especially proud of is that I had my part in improving safety," Wally says. "Back in those days NASCAR had their head in the sand like an ostrich and we were moving ahead. We were the innovators and eventually, after they lost some people, they learned from us."

Dallenbach looks back with pride that he worked through an era when Indy car racing was at its global height. F1 world champions Mario Andretti, Emerson Fittipaldi and Nigel Mansell were in the field and CART built a huge worldwide following, briefly challenging Formula 1 for global supremacy. Renowned team owner Chip Ganassi puts Dallenbach's achievements in perspective.

"Wally was the unrivaled master of all chief stewards," Ganassi declares. "When you look at safety and who drove it, you look at people like Bill Simpson, Wally, and the guys who did the HANS device. Wally is right there at the top of the ladder as a leader in safety. Wally is a humble guy but he's a giant in the industry. He had a larger impact on the sport than 99% of the people in motor racing."

Adds Mario Andretti: "Wally was highly respected. He was a voice of reason, one that you could disagree with but at the same time have a healthy debate with. I always enjoyed a warm friendship with the Dallenbach family. I really admired the man and still do.

"Wally made his mark in a really positive way both as a driver and as a chief steward. That speaks volumes for him. He supported all the efforts to improve car safety and build CART's medical team. In fact, he was a leader in that way and set the standard for the sport that stands to this day."

Kirby is one of the world's most accomplished racing writers. He's covered more than 1,000 races over the past 45 years and has written 16 racing books. "Wally Dallenbach: Steward of the Sport" was published in 2018. "Chris Pook's History of the Long Beach GP" will be available in April.