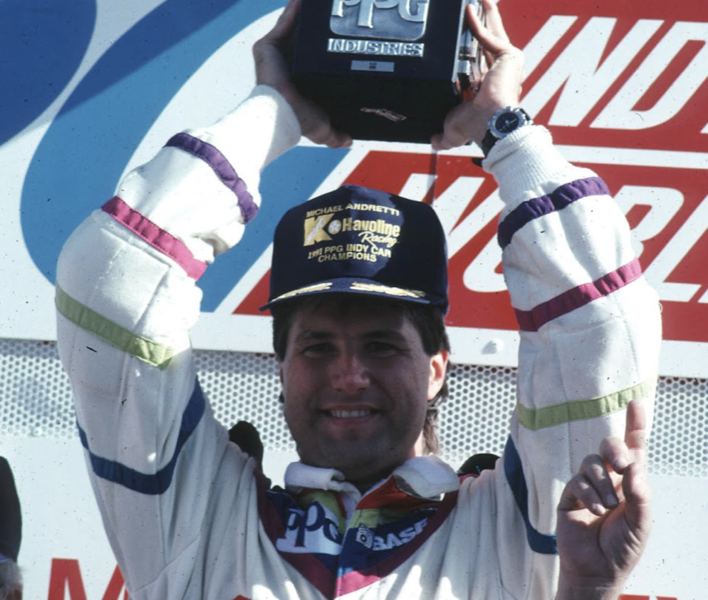 With the obvious exception of fellow Hall of Famer Richard Petty, Michael Andretti is the most successful second-generation driver in American racing history. His 42 National Championship race wins rank him third on the all-time list behind only A.J. Foyt and his own father, Mario, and since retiring from driving after Indianapolis in 2003 – save for his two last shots there in '06 and '07 – he's amassed an enviable record as a team owner as well. Besides winning the 500 twice, his team has collected three of the last four IRL championships.

Following in the expansive footsteps of his father, Michael began racing karts at age 10, winning 50 of his 75 races over the next eight seasons. He got his SCCA National License in 1980, then won six races to claim the SCCA's Northeast Division Formula Ford championship in '81. Climbing onto the single-seat ladder system, he earned consecutive professional championships in Super Vee (1982) and Atlantic (1983) prior to making his Indycar debut toward the end of that latter season.

Over the next 20 years he would inscribe his name indelibly in racing's record book. Beyond those 42 Indycar wins, he also ranks second in career earnings (to Al Unser) with more than $18.3 million; third in laps led with 6607, again trailing just Mario and A.J.; and fifth in poles with 32. He won the National Championship in 1991 with eight wins and eight poles from 17 races, as well as finishing second in the championship five times and third twice.

Although he never won at Indianapolis as a driver, Michael finished second to Rick Mears in 1991 after the two traded memorable late-lap outside passes for the lead in Turn One. The next year he held a two-lap lead with 11 to go when his car's fuel pump drive failed. He shared Rookie of the Year honors with Roberto Guerrero in 1984, when he finished fifth, and he ranks 10th all-time in laps led with 431 – the most of any non-winner.

For four seasons between 1989 and 1992 he enjoyed the unique experience, privilege and honor of having his father as his teammate at Newman/Haas Racing. Together they established a number of firsts, including the first father-son front row, at Phoenix in 86, and the first of 15 father-son podiums at Laguna Seca in 1984, with the last coming nearly a decade later at Surfers Paradise.

In 1993, Michael signed with McLaren to contest the Formula 1 World Championship, but endured a desultory season of misfortune and misadventure. He joined one of F1's premier operations alongside the legendary Ayrton Senna just as McLaren was experiencing a downturn in performance. Stung by a string of luckless incidents he ended up making a premature exit from the team despite a podium finish in his final race, the Italian Grand Prix at Monza.

After enjoying a Hall-of-Fame career as a driver, Michael is now devoting his energies to carving a similar distinctive niche as a car owner.