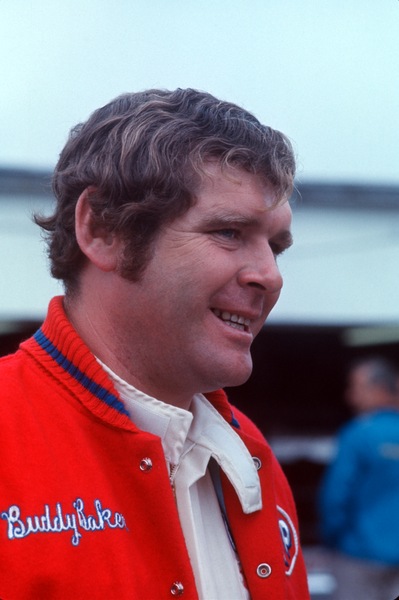 During Buddy Baker's prime in the NASCAR big-time, the ''Gentle Giant'' of stock car racing drove like the wind and cracked one-liners like a vaudeville comic.

In joining longtime friends and rivals Richard Petty, Cale Yarborough and David Pearson on the sideline, Buddy finished with impressive statistics. NASCAR lists him with 699 starts, 19 victories, 43 second place finishes, 58 thirds, 52 fourths and 40 fifth place showings. He finished sixth through 10th another 109 times and posted $3,635,022 in winnings. The latter is when purses were a fraction of what they are today in the NASCAR Sprint Cup Series.

According to Petty, "If Buddy had gotten any luck at all, he'd have won 50 races."

''I know that 19 victories might not seem like a whole lot, but I'm proud of them because of where they mostly came,'' said Baker. ''Four each at Charlotte and Talladega. Two each at Daytona, Darlington and Atlanta. One each at Michigan and also at Texas (World Speedway) and at Ontario, the big California track that no longer exists.

''Not many drivers can say they've won at NASCAR's Big Four tracks during my era--Charlotte, Darlington, Daytona and Talladega--so I feel real special about being among those who can.''

Baker, looking back fondly, conceded he wondered for years if he'd ever succeed in stock car racing. The son of two-time NASCAR champion and Hall of Famer Buck Baker, he didn't win until his ninth season, scoring at Charlotte in the fall 500-miler of 1967 in a Ray Fox-fielded Dodge after more than 200 starts.

''I was patient because I knew how much I had to learn,'' said Baker, who'll maintains ties to motorsports as a consultant to Penske South Racing.

''The first race I ever drove was at Columbia Speedway in one of Daddy's cars,'' Baker said. ''As the race went on I was fuming. I said to myself, 'This thing won't run. I need more horsepower.'

''Well, the car my father was driving broke and he came and got in mine. He almost won the race. That showed me that just wanting to drive wasn't enough. You had to acquire knowledge. I learned that night that once races began, you might say it's no longer the arrow that's the main thing, it's the Indian.''

Baker said his most memorable season was 1980, when he won the Daytona 500 in an Oldsmobile prepared by Waddell Wilson for a team owned by Harry Ranier. The black and gray car was so fast it blended into the asphalt and was nicknamed ''The Gray Ghost.'' Baker averaged 177.602 mph in taking the 500, still the record for the sport's biggest event.

''I'm thankful to all my old crew guys and team owners, but especially to Waddell and Harry for that year,'' he said. ''We had 10 top 10s in just 19 races. We even won at the toughest short track, Martinsville. That was sort of like Barry Sanders playing Arena Football.

''The most memorable race? I couldn't choose just one. But I especially like to remember the Winston 500 of '80 at Talladega. After the last pit stops I was 19 seconds behind Dale Earnhardt, but I ran him down and passed him with about two laps to go to win.

''That was only Dale's second full season, so I'm lucky to have caught him when he relatively was a Cub Scout who didn't know much about aerodynamics and drafting. It'd have been interesting if he did later on.''

The charge, in which Baker drafted every car ahead of him, prompted one driver to say, ''Buddy could get air off a paper bag.''

Baker's days as a strong contender essentially ended in 1989 when it was discovered a blood clot had developed on his brain, the result of a bump on the head in an accident nine weeks earlier in the Coca-Cola 600 at Charlotte. ''I blacked out during practice at Watkins Glen and came home,'' said Baker. ''Luckily for me, Dr. Jerry Petty found the clot, which was the size of a peach, and removed it in an emergency operation.''

Baker, fully recovered, started 17 races after the blood clot scare, then he retired his helmet after crashing during a qualifying lap that appeared on the verge of putting him on the pole at Atlanta.

''I didn't want to be like the major leaguer who once pitched no-hitters but now just pitches,'' he said with a smile.