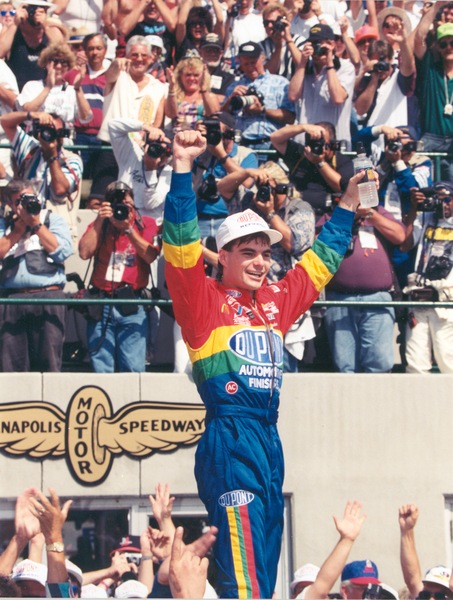 Folks thought car owner Rick Hendrick was a bit off his rocker when he hired Jeff Gordon in 1992 to run one of his Monster Energy NASCAR Cup Series cars in 1993. After all, Gordon was a 21-year-old with an open-wheel background, who had ventured south to run an Xfinity Series car for Bill Davis.

Gordon, who had no Xfinity wins after his first two seasons, caught Hendrick's eye during a March, 1992 race at Atlanta Motor Speedway. Gordon started the Atlanta 300 from pole in the #1 Baby Ruth Ford and seemed on the verge of crashing each lap.

Hendrick was on his way to a meeting, but stopped to watch because he thought Gordon was "going to bust his butt" at any minute.

Instead, Gordon hung on for the victory over Cup stars like Dale Earnhardt, Mark Martin and Bill Elliott. Hendrick was so impressed with the young driver's car control, he had him under contract in a matter of weeks.

Gordon made Hendrick look like a genius because the young California native, driving the brightly colored #24 Chevrolet, won a Daytona 500 qualifying race and finished fifth in his "Great American Race" debut at Daytona International Speedway. While Gordon did not win a race in '93, he did snag Rookie of the Year honors and earned the respect of NASCAR's old guard.

In 1994 Gordon, his crew chief Ray Evernham and the "Rainbow Warriors" won twice, including the inaugural Brickyard 400 at Indianapolis Motor Speedway.

It was that Indy win that catapulted Gordon to superstar status in NASCAR's premier division.

With those wins in hand and confidence built, Gordon would spend the next five years as the series' most dominant driver, scoring 47 wins and three championships.

He also created a unique rivalry with the most-decorated veteran in the garage area; seven-time champion Earnhardt, who won his last title in 1994.

The following year, Gordon began his run of success winning his first championship at the age of 24.

The two publicly sparred. After winning the 1995 Brickyard 400, Earnhardt said he was the "first man" to win the marquee event.

In fact, they became close friends. Earnhardt was something of a mentor to Gordon.

Gordon retired from racing following the 2015 season, but was called back into service in 2016 for eight races when Dale Earnhardt Jr. was sidelined by concussion symptoms.

When he finally hung up the helmet, Gordon had made 805 starts, scored 93 wins (third best all-time), four Cup Series championships and brought a younger demographic into the NASCAR fold.

"I felt like this was the right time," said Gordon of his decision to retire age 44. "A lot of things added up to make it the right time."

Gordon made the jump from driver to broadcaster. He joined the FOX Sports team as a race analyst and made his network debut for the 2016 Daytona 500.

For Hendrick – who took that gamble on the kid driver from California– it was a bittersweet moment when Gordon told him 2015 would be his last full season.

"I just thank him for all he's done to help our company and all the records he's broken," Hendrick said.