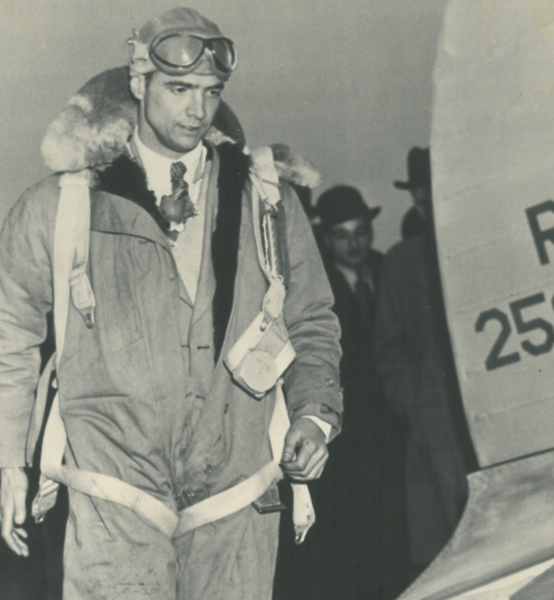 By his 20th birthday in 1925, Howard Robard Hughes had inherited a majority position in the Hughes Tool Company, been declared an "emancipated minor" and thus a legal adult, and was starting to cultivate the ruthless business talents that would hold him in good stead for most of the many remaining years of his life. He eventually became a movie mogul, an entrepreneur, one of the world's greatest philanthropists and perhaps most importantly, a prime mover and history-maker in the rapidly expanding world of aviation.

Hughes took his first flying lessons at 14. Though he would have many other interests, flying and aviation became the epicenter of his life. It started in Hollywood with his highly successful but controversial 1930 film Hell's Angels, which Hughes produced and directed. It was while filming Hell's that Hughes survived the first of four major aircraft accidents.

In 1935, under the auspices of his Glendale, California-based Hughes Aircraft Company, Hughes began building the first of his precedent-setting "homebuilt" aircraft, the H-1 "Racer." With a metal fuselage, powerful R1535 radial engine, and two sets of wooden wings (one long-span set for distance speed records and one short-span set for sprints), he set several world speed records, including an absolute landplane record of 352 mph and a Los Angeles-to-New York record of 7 hours 28 minutes and 25 seconds.

In 1938 Hughes tackled another challenge, setting a new around-the-world record of 91 hours and 17 minutes while flying a modified Lockheed Model 14 Super Electra. World War II and the need to quickly and safely deliver war machinery to Europe led to the creation of perhaps Hughes' most memorable aircraft, the H-4 Hercules flying boat. Though made almost entirely of birch, it was tagged the "Spruce Goose" by the press. With a wingspan of 321 feet and length of 219 feet, the H-4 was by far the largest aircraft in the world when it was unveiled to the public in early 1947. It would fly only once, on November 2 of that year.

Two more aircraft reached fruition under Hughes' umbrella before he transitioned to airline ownership (TWA and Air West among them) and an attempt to monopolize parts of the industry. The first would be the ill-fated and little-seen D-2 twin-engine, twin-boom fighter. The second, the similarly ill-fated XF-11 twin-engine, twin-boom high-altitude reconnaissance aircraft. The all-wood D-2 was consumed by a hangar fire early in its flight-test program. The all-metal XF-11 crashed with Hughes at the controls, as depicted in the 2004 Martin Scorsese biopic, The Aviator. It almost cost him his life and prematurely ended the program after two prototypes were built.

Hughes' influence on the aviation business was enormous. Among his many accomplishments were his involvement in the design and development of the world's first pressurized airliner, the Boeing Model 307, and his engineering and financial support that gave birth to the elegant Lockheed Constellation.

Before his death on April 5, 1976, among the many prestigious aeronautical awards Hughes received were the Harmon Trophy (1936 and 1938), the Collier Trophy and the FAI's Bibesco Cup (both in 1938), the Octave Chanute Award in 1940, and a special Congressionally authorized Gold Medal in 1939.