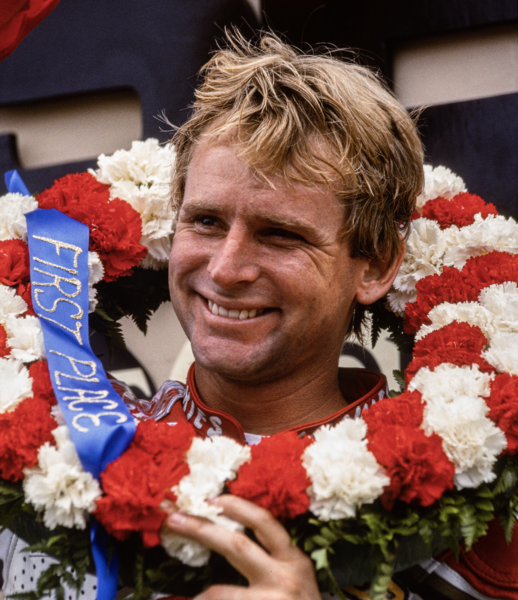 Any argument over who is America's best-ever motorcycle racer has to include the name Wayne Rainey.  By the time he suffered career-ending injuries in a crash in Italy in 1993, his place in the history books was already cemented for all time.

Wayne was born on October 23, 1960 in Downey, California.  He got the racing bug from his dad Sandy, who raced go-karts and motorcycles for many years, and when he wasn't racing, Sandy would help tune other riders' bikes at races in Southern California.  When Wayne was about six years old Sandy fixed him up with his first mini-bike and it was all full speed ahead from there.

Wayne's professional racing career started at motorcycle dirt track events.  He learned how to control his bikes with the rear wheel in full lock slides through slippery turns. He would figure out later how to apply this skill to control powerful, high-revving Grand Prix roadracers.

Wayne met Eddie Lawson early in his career.  Eventually the two were traveling the country in a van, racing on the AMA Camel Pro dirt track series. Along the way, Eddie got the chance to join the Kawasaki roadrace team and when a spot opened up later on team, Lawson recommended Wayne for the job.

He returned to the Grand Prix series in 1988 and this time went all the way to the top.  Over the next six years Wayne won 24 Grand Prix events and was crowned World Champion three times racing.  In 1993, he won four races, including the Grand Prix of the Czech Republic where he took over the lead in the world point standings from his arch-rival Kevin Schwantz.

The very next event was the Italian Grand Prix at Misano, which would be his last as a racer.  Following his devastating crash there, he quickly began an aggressive rehabilitation program, as well as developing a new future for himself in racing.  And when the 1994 season opened in Australia, Wayne was there in his new role as a race team manager.

Today, Wayne lives with his wife, Shae, and son Rex in Monterey, California.  Despite being limited to a wheel chair for his normal activities, Wayne and long-time friend Eddie Lawson spend a lot of time racing go-karts, with his dad Sandy Rainey again tuning his machines.

This year, he fittingly joins Kenny Roberts and other motorcycle legends as an inductee to the Motorsports Hall of Fame.