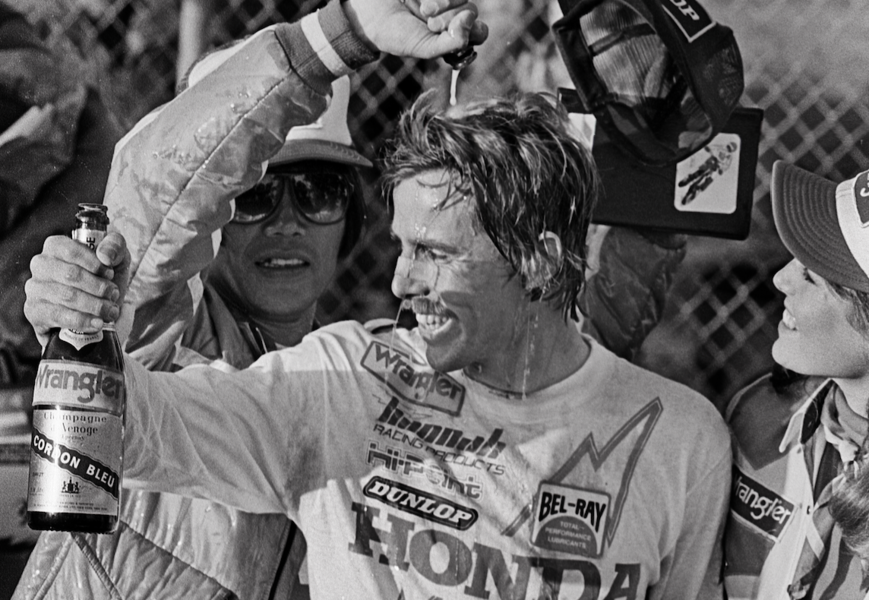 Bob "Hurricane" Hannah, was the best in the world. And like others who have earned that distinction, he hated to lose. Whether it was supercross or motocross, if there were riders in front of him, he'd use every inch of the track to catch and pass them. For Bob Hannah, motocross was a war. And in war there can only be a single victor. He had no regard for anyone that accepted less.

"What do I think about other racers? On the track I hate 'em. Off the track, I just plain don't like 'em. You can't be friends with a guy you might have to knock off the track to pass. And if I'm behind, I'm gonna pass." -- Bob "Hurricane" Hannah

Hannah learned his early riding skills from his father, "Wild Bill," in the hills and desert surrounding Lancaster, California, where he was raised. His first rides were on the rear of Wild Bill's motorcycle, then on his own 50cc Honda. Hannah was eleven when he entered and won his first race. At the age of seventeen, a friend offered the use of a CZ motorcycle to introduce him to motocross. That set the hook, and Hannah's career was underway.

Racing locally, Hannah decimated the competition. When Suzuki needed a test rider, they hired him for the princely sum of $750 a month. One year later, he asked for a spot on Suzuki's factory team. Unfortunately for Suzuki, the team was full. There was no room for anyone, let alone a local rider with less than two year's experience. Yamaha though, was looking for young talent and gave Hannah a chance.

His proving ground was the tough 1976 Florida Winter AMA series. Astounding the seasoned competition, Hannah captured all five rounds in the 500cc class. He followed that with five wins in the 125cc National Championship series to earn his first AMA National crown.

The next three years saw Hannah win a pair of 250cc National titles, and three Supercross Series championships. His win list grew in staggering numbers and so did his fame. Fans adored him. First for his radical feet off the pegs riding style.

"I had to ride that way," Hannah said. "It was the only way I knew." Then for his come-from-behind determination and desire to win every race he entered. "Seems like I was always in the middle of the pack at the start. I couldn't buy a holeshot, so I had to come from behind to win. That's what they paid me for and the more I won, the more they paid."

And finally the fans liked him for his willingness to ignore the politically correct, in favor of telling it like it is. Outspoken? The Hurricane was that and then some. If you suspected the truth would hurt, don't ask Bob Hannah. He never made excuses, and he never blamed a race loss on an illness or an injury. If an on track incident was his fault, he readily accepted the blame. The fans loved it and so did the media.

Finding the Hurricane at the end of the day was easy. Look for the huge crowd. In the middle would be Hannah. Signing autographs, exchanging quips with the fans, and hanging out.

The first four years of Hannah's professional career produced six National Championships. Unfortunately, there would be no more. In 1979, at the height of his career, Hannah smashed into a jagged rock while water skiing. His leg was so severely injured that amputation seemed certain. The Hurricane again called on his determination to do the impossible, and again he won.

To feed his competitive juices while recuperating, Hannah had something to prove. In 1981, after missing an entire year of racing, he returned to the most physically demanding sport in the world.

His timing was off, conditioning was suspect, and the motorcycles he was used to, had undergone some major changes. The media pointed out that no rider had ever sat out a year and returned to success. Bob Hannah though, was no other rider. With nothing more than pure determination, the Hurricane finished second in the 250cc National Championship series.

1982 was Hannah's last year with Yamaha. Not winning, Hannah blamed the bikes, and Yamaha blamed the rider. By mutual agreement, the year remaining on his contract was dissolved.

In 1983, not willing to throw in the towel, Hannah rode for Honda. In the 250cc National Championship series he won five of the first six races. In supercross, he won four of the first six. Championships in both classes were all but assured. The Hurricane, defying all odds, had fought his way back. But it was all to no avail. A broken ankle ended the season prematurely.

The following year, the bad luck continued. A crash while testing left Hannah with a broken pelvis.

There were still a few great races left. He won the U.S. Grand Prix in 1986, and was the star of the U.S. Motocross Des Nations Team that won the World Team Championship in 1987. The competition never counted him out. His dominance however, was over. In 1989, at 32 years of age, and with scars from thirteen years of never giving up, the Hurricane called it quits.

For the record, the last race of his career was the U.S. Grand Prix at Unadilla. After the first lap of both motos he was 31st. Against the best in the world, the Hurricane roared through the pack to finish 9th and 12th.

After retiring from motorcycle racing, Hannah dabbled in other forms of motorsports. He qualified extremely well in the single race he entered in the Champ Boat Racing series, but due to lack of experience was forced to start at the rear of the pack. He finished second.

He attended the Russell School of Driving and was tops in his class. Afterward, he won one of the two races he entered.

Hannah pursed a passion for flying. First in stunt competitions, then racing. In 1998, flying "Voodoo" in the unlimited Gold Class at Reno, Hannah was top qualifier turning the pylons at 452.55 miles per hour.

His day ended when one of the elevators fluttered then broke off. Despite an uncontrolled climb to 9,000 feet, and temporarily blacking out, Hannah managed to land the plane.

He was, and still is, the Hurricane. In his era he was the best in the world. He may well have been the best ever.