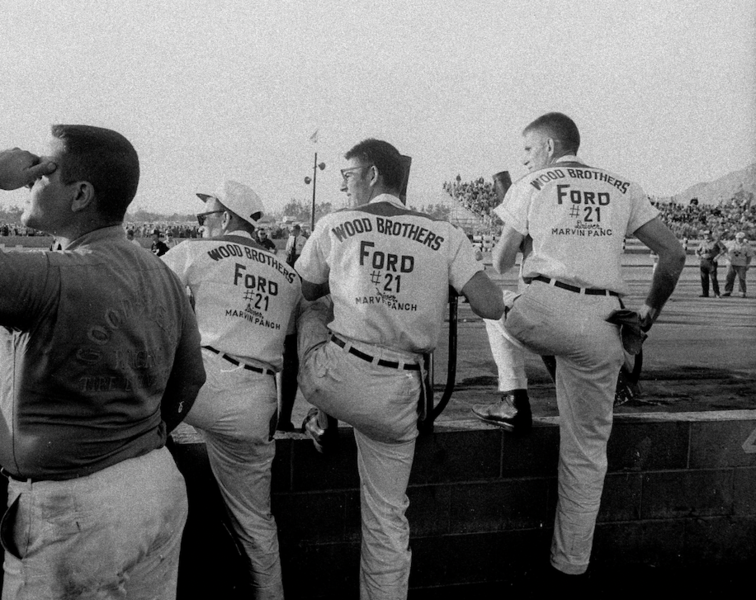 Glen and Leonard Wood have done more to revolutionize the sport of NASCAR racing than anyone in motorsports history. These siblings from Stuart, Virginia, have scored 96 victories, 116 pole positions, and were responsible for developing today's orchestrated pit stop technique. Not only did the Wood Brothers use their choreographed system to win at such competitive speedways as Daytona, Charlotte, Darlington, Michigan, and Atlanta, but they also used it to win the 1965 Indianapolis 500 with the late Jimmy Clark as their driver.

Part of the Wood Brothers' legacy over their fifty years in stock car racing has been their knack for hiring talented drivers, even though Glen Wood (known as "The Woodchopper" since he owned a sawmill in Stuart by the age of 21) drove the family's race cars himself during the 1950s and became recognized as one of the sport's best short-track racers. Of the top fifty drivers named to commemorate NASCAR's fiftieth anniversary in 1998, seventeen had driven for the Woods. Such legendary competitors as David Pearson, Tiny Lund, A.J. Foyt, Cale Yarborough, Donnie Allison, Marvin Panch, Dan Gurney, Neil Bonnett, and Parnelli Jones have all been behind the wheel of a Wood Brothers entry. This year marks Glen and Leonard's golden anniversary in racing, a fifty-year period that forever shaped NASCAR's history and its impact on American culture.

The Wood Brothers' greatest mark on motorsports history was their performance in the 1963 Daytona 500. Marvin Panch, Glen and Leonard's driver, was seriously injured in a sports car race when the Maserati he was driving overturned and caught fire. Several bystanders leaped into action to rescue Panch from the flames; one of the rescuers was a stock car driver from Iowa named DeWayne "Tiny" Lund. Since Panch was injured in the accident, and the Wood Brothers' red and white #21 Ford needed a replacement driver, Lund was given the chance to compete in the Daytona 500.

The 1963 Daytona 500 ended up becoming the greatest "Cinderella story" in all of professional sports history. Tiny Lund and the Wood Brothers ran a masterful race, using effective drafting techniques and smart pit strategy to conserve fuel and stay ahead of challengers like Ned Jarrett and Fred Lorenzen. As their competition pitted for closing lap splash-and-go fuel stops, Lund and the Wood Brothers ended their day by parking in victory lane, celebrating their Hollywood-like performance at the World Center of Racing. Adding to the excitement of their 1963 win: the Wood Brothers never changed the Firestone tires on Lund's car!

The Wood Brothers have visited victory lane at the Daytona 500 on four different occasions with the help of drivers like Lund (1963), Cale Yarborough (1968), A.J. Foyt (1972), and David Pearson (1976), whose win that year went down in the annals of sports history as the wildest finish ever seen in motor racing. Pearson's battle with Richard Petty near the end of the event resulted in a last-corner-of-the-last-lap accident that sent both drivers and their cars spinning into the infield grass just yards from the finish line. While Petty struggled in vain to refire the engine of his Dodge, David Pearson rolled the Wood Brothers' Purolator Mercury across the finish line at less than twenty miles per hour to win the race.

Such events highlight the Wood Brothers' role in the evolution and success of the NASCAR Winston Cup Series. Whether it be an outstanding car driven by a talented hotshoe, or an innovation that catches the rest of their competition by surprise, Glen and Leonard Wood have helped make stock car racing the popular sport it is today. Their addition to the Motorsports Hall of Fame is another accomplishment of which they can be truly proud.