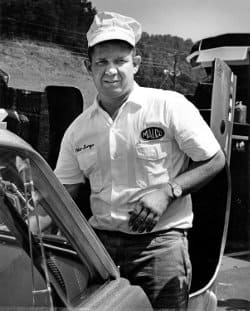 In the days before fire-breathing Funny Cars, AA/Gas Supercharged cars ruled the center ring of drag racing's circus. Competitors eschewed late model vehicles of the era, preferring the slippery-looking cars from days of yore. Visually stunning machines like Big John Mazmanian's candy apple red '41 Willys and the equally gorgeous candy blue Willys fielded by Stone, Woods & Cook ruled the roost on the West Coast, but they were far from alone in their quest for showmanship and performance honors. More than two thousand miles east the owner of a small speed shop in Dayton, Ohio named George Montgomery began earning a reputation for outstanding performances with a powder blue '33 Willys that would garner him multiple honors — and a whole lot of impressive victories.

Considerably more circumspect than some of his rivals, Montgomery let his car do the talking. From his first victory at the 1959 U.S. Nationals through a remarkable string of seven more that ended in 1968, "Ohio George" amassed a record of class and/or eliminator victories that has seldom been matched. They vaulted Montgomery to the top of the popularity charts, earning him spots on the first two Car Craft Magazine All-Star Drag Racing Teams in '67 and '68.

Montgomery's "reach" went beyond the finish line, a point proven conclusively when he was approached by Ford to field a late-model, 429 Shotgun-powered Mustang. One run convinced him that the longer-wheelbase machine was infinitely safer than the crowd-pleasing Willys — faster, too. Montgomery's peers quickly took notice, many building late model cars of their own. In hindsight the transition to late models was a mistake. With the colorful wheelstanding antics of the older cars eliminated, and supercharged, nitro-burning Funny Cars peaking over the horizon, Gassers would never again occupy drag racing's center ring.

Down through the years Montgomery has made appearances at the U.S. Nationals with the still-immaculate '33 Willys, often with the Ford Falcon Ranchero he won at one of the ‘60s Nationals. Those visits apparently convinced fans that Montgomery's involvement in motorsports ended when he stopped driving in the ‘70s, but nothing could be further from the truth.

George's Speed Shop's quaint name belied its true nature. More than a purveyor of hard parts, Montgomery's operation had become a first-class machine shop and engine assembly destination, its reach extending far beyond Ohio's borders. Just as Ford had spotted Montgomery's talents, so, too, did General Motors in the mid-‘80s. For 15 years Montgomery was the sole supplier of Buick V6 spec engines for the Indy Lights series, churning out more than 100 reliable, evenly tuned powerplants. Montgomery's even-keel personality helped avoid one of the pitfalls of supplying spec engines to any series, the "He has more horsepower than I do" syndrome. Montgomery's operation still concentrates on engine building, but now as many engines are destined for Street Rods and Machines as they are for racing.

Despite his exploits in other forms of motorsports, "Ohio George" will be forever known as an innovative drag racer. Honors such as his induction into the International Drag Racing Hall of Fame in 1992 and being named on the NHRA Top 50 Drag Racers of All Time at #28 insure his legacy will live forever.

Jon Asher is the former editor of five drag racing-related magazines. In 53 years of writing about and photographing the endeavor he's received two Special Recognition Awards from the All-Star Drag Racing Team, the Founders Award from the International Drag Racing Hall of Fame and AARWBA's Straight Shooter Award.