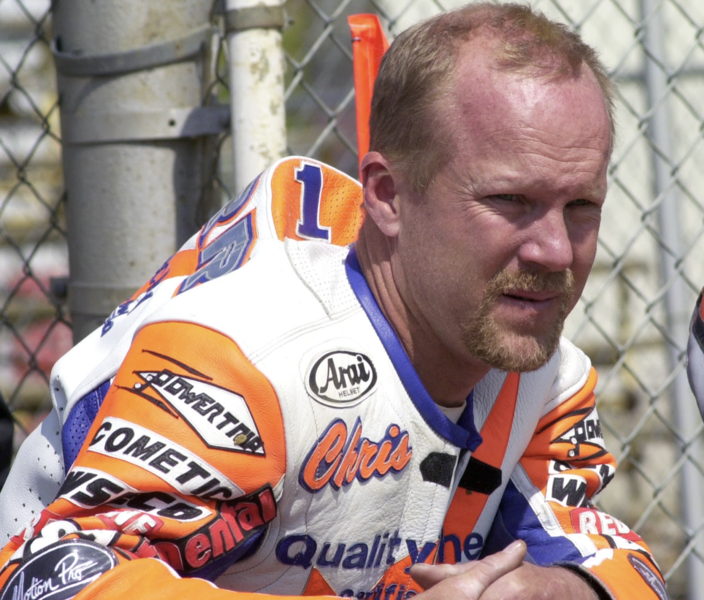 Chris won his first AMA Grand National Flat Track title in 1992 as a factory Harley-Davidson rider. It was the beginning of a run that eventually would include six more Grand National titles, 78 championship wins, seven 600cc crowns and a Formula USA Dirt Track Series title. Impressive credentials, but consider this: the early years of his career were spent competing against four dirt-track champions who preceded him into the Motorsports Hall of Fame of America — Ricky Graham, Scott Parker, Bubba Shobert and Jay Springsteen. And that, according to Chris, is what made him a seven-time time Grand National champion.

"I got beat by the best and I learned from the best," said Carr. "Then it was my turn."

His turn, though, was interrupted by his desire to test his talents in road racing. His plan was to compete in both dirt track and on asphalt as a member of Harley's fledgling road race team. In 1995, he launched his plan. Chris won three national dirt-track races and finished third in the Grand National championship standings. He was also named AMA Superbike Rookie of the Year in road racing.

Chris put his dirt-track career on hold and devoted the next two years to improving his road race skills. There was a problem, however. Harley's VR1000 Superbike was grossly underpowered. In 1996, Chris did give the Harley factory its first and only pole position, but that was not enough. Chris was 30 years old with a deep desire to win. So, with no horsepower improvement in sight for the VR1000, he made the switch back to the Grand National series.

There was no room for Chris on the factory team, but with help from a local dealer, Harley-Davidson of Sacramento, Chris won three national races. He finished second in the championship, only two points out of first.

In the year that followed, he won his second Grand National crown. In 2001 Chris formed his own team. With longtime tuner Kenny Tolbert spinning the wrenches, Chris dominated the Grand National scene, winning a record-tying five championships in a row.

En route to his record setting run, Chris became the only rider to have gained sponsorship from a Fortune100 company. For six years the Ford Motor Company was along for the ride.

By 2006 Carr's dirt-track career was winding down. His desire to go fast and be the best, however, was still very much alive. He joined Denis Manning who was planning an assault on the motorcycle land speed record. With Carr at the helm, the BUB Seven Streamliner set a new world record, and Carr became the first motorcyclist to exceed 350 miles per hour.

In 2009 Chris and Denis returned to the Salt Flats and set another world record with a two-way pass that averaged 367.382 mph.

From the dirt tracks and road courses spread across America to the Salt Flats of Bonneville, Chris Carr cemented his legacy and place in the Motorsports Hall of Fame of America. Did Chris enjoy one form of two-wheel competition more than the others?

While president of Penton Imports and Hi-Point Racing Products, AMA Hall of Famer Maiers announced motorcycle races and hosted two TV shows: MotoWorld and Bike Week. "It was a great career. But the best part was the friends I made. It's gratifying to see so many of them in the MSHFA."