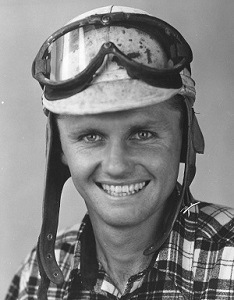 He won the Indianapolis 500 on a dark day that claimed a legend, captured three titles in one season, triumphed in what many say was the greatest dirt race ever and lost his life in the prime of his career.

Bob Sweikert packed a lot of memories and success into his 30 years before that tragic day at Salem in 1956.

Emerging from the track roadster era while growing up in northern California, the native of Hayward instantly showed his prowess in midgets and then sprint cars before heading back to the Midwest in the early 1950s.

In 1952, he caught the eye of car owner Lee Elkins and made his first start at Indy in the McNamara Special, but it was 1953 that put Sweikert in the spotlight.

The inaugural Hoosier Hundred at the Indiana State Fairgrounds drew 34 cars for the 18 starting spots and Sweikert was running the prestigious Dean Van Lines car with Clint Brawner.

Starting third, he grabbed the lead from pole-sitter Manny Ayulo on Lap 5 and never relinquished it. Sounds pretty boring unless you saw it because Johnnie Parsons, Don Freeland and Ayulo traded second through fourth all a few feet behind Sweikert’s tailpipe for 95 laps.

It was a photo finish between the four of them and, as Brawner said afterwards, “the best race I ever saw.”

By 1955 the handsome Californian had hooked up with John Zink and the chief mechanic everyone wanted – A.J. Watson. Qualifying 14th at Indy, Sweikert charged to the front and led 86 laps to win by almost a lap over Tony Bettenhausen, but his victory lane celebration was muted by the news that Bill Vukovich had died.

After Indy, Sweikert scored another win at Syracuse and, combined with three runner-up finishes, earned the AAA national title in addition to also claiming the Midwest sprint car championship.

It was the first time anyone had captured the American Triple Crown in the same season and prompted Watson to say, “Sweikert was one of the best – on dirt or pavement – and that was a hell of an achievement.”

That partnership might have won back-to-back Indy 500s had the driver not learned his car owner had taken out a $50,000 life insurance policy on him. So steamed about it, Sweikert quit so Pat Flaherty took his ride with Zink and rode it to victory in 1956 at IMS.

“Sweikert was really pissed off and it took some guts to walk away from that ride,” recalled Watson back in 2001.

Finishing sixth and watching his old car win the pole and dominate the race (leading 127 laps) didn’t deter Sweikert from trying to make it two straight sprint car crowns. Even though he was an Indy winner, the Hollywood-handsome racer enjoyed sprinters because it kept him sharp and made extra money.

But on June 17, 1956, as he was dicing for third place in the main event on the treacherous high banks of Salem Speedway, Sweikert rocketed out of the track and crashed to his death.

Indianapolis native Robin Miller grew up idolizing Jim Hurtubise and Parnelli Jones. At 18 he got to stooge for Herk at the 1968 Indy 500 and began covering racing for the Indianapolis Star the following year. Later he worked at ESPN on RPM2Nite, then SPEED Channel and WIND TUNNEL. Currently he writes for RACER and RACER.com and is a reporter for NBCSN’s IndyCar coverage.