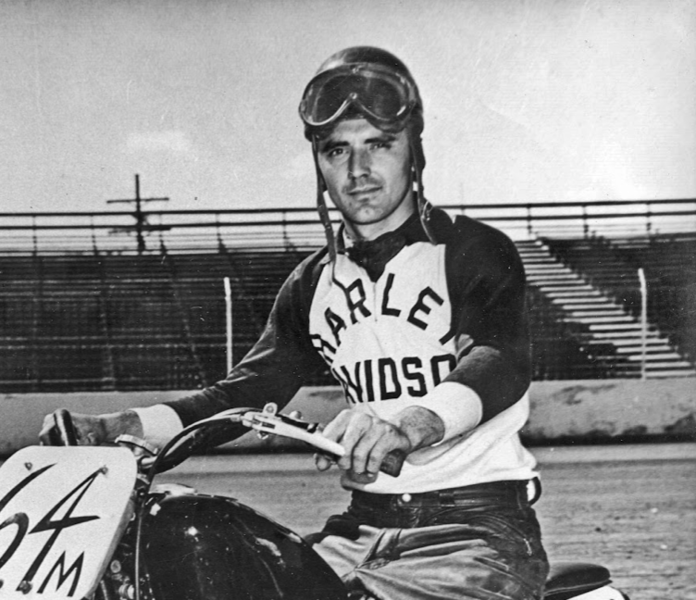 “What, me worry?” We probably all remember those famous words by MAD Magazine’s Alfred E. Neuman. They might also have been said by motorcycling legend Everett Brashear.

While many racers often beat themselves by believing that their challenges are too great to overcome, an attribute that played a big role in Everett’s success was his ability to stay calm and focused, even when the odds might seem to be against him.

The record books show that from 1951 to 1964 Brashear logged 15 career wins in the AMA Grand National Championship series against the top racers of his era, including previous Motorsports Hall of Fame of America inductees Paul Goldsmith, Joe Leonard, Dick Mann, Bart Markel, Gary Nixon, and Carroll Resweber. He also came within a whisker of winning the 1955 AMA Grand National Championship.

After racing at the lower levels, he graduated to the top class in 1951 and began scoring wins in local dirt track races in and around his hometown of Beaumont, Texas. That gave him the confidence that he was ready to take on America’s biggest stars in the Grand National series. He did just that and the next season scored his first-ever AMA National victory at Sturgis, South Dakota, riding one of the all-new Harley-Davidson KR race bikes.

Brashear was now a National race winner. Life was good and success came often. He reeled off four more National wins in 1953 and was considered one of the best riders on the circuit. He soon learned, however, that racers at any level run the risk of having their good luck run out.

Everett suffered serious injuries early in the 1954 season from a crash in Alabama. He had been run over by another rider and was in a coma for a week. In addition to a broken arm and leg, he had one other injury that he didn’t divulge to very many people. The hit to the head severed an optic nerve and he permanently lost the use of his left eye.

While many competitors might hang it up after such a serious injury, Brashear didn’t make a big deal out of it and wanted to return to racing as soon as he could. He just made the best of his new situation.

Just four months later, Everett’s bones were healed and he was ready to put his vision limitations to the test. Incredibly, in his first race at the Illinois State Fairgrounds in Springfield, Brashear finished second, then the next weekend scored a victory in the grueling 100-mile dirt track race at Langhorne, PA. He would race another ten years on the National circuit—winning five more National races—with only the use of his right eye.

After he hung up his steel shoe, Everett got into the motorcycle industry where he worked for numerous companies through the years. He started as a sales rep selling Triumph motorcycles, but later worked for Yamaha, Kawasaki and Husqvarna, as well as other companies.

Everett Brashear has previously been inducted into the AMA Motorcycle Hall of Fame, the Trailblazers Hall of Fame and the Sturgis Hall of Fame. He will be 90 years old on January 17, 2017.

Now an author and publisher, Don Emde made history in 1972 when he took the checkered flag to win America’s biggest motorcycle race, the Daytona 200. He and his father, Floyd Emde, became the first and still-only father and son to have won that prestigious event.