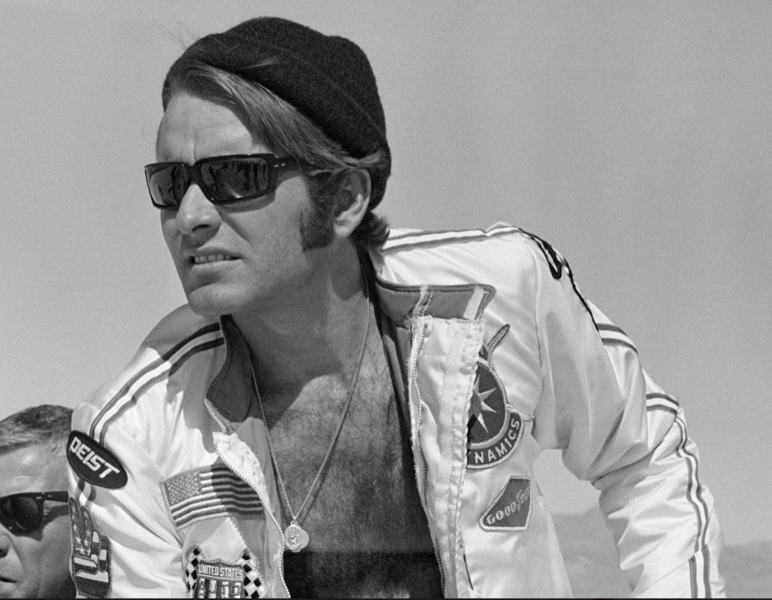 In the 43 years of his amazing life, Californian Gary Gabelich won races and set speed records on asphalt, dirt, water and salt, and had a brief career as a test astronaut at North American Rockwell during the Mercury and Apollo space programs. As childhood friend Bud Rasner said, Gabelich was “simply fearless.”

Gabelich started as a street racer in Long Beach, graduated to drag racing, and drove fuel dragsters, jet cars and funny cars, most notably the Purple Gang dragster and Beach City Corvette funny car. At North American Rockwell, he jumped out of airplanes at 30,000 feet while testing astronaut gear for future missions.

Gabelich won the American Power Boat Association Blown Fuel and Blown Gas National Drag Boat Championship in 1968, the first to win both in the same year.

In 1969, he became the first man since Donald Campbell to go 200 mph on water, setting a quarter-mile drag boat speed record of 200.44 mph (Campbell’s boat went a far greater distance to get to 200).

Gabelich told the film crew covering the Blue Flame rocket car’s land speed record attempt that he had drawn a rocket with wheels on it when he was a kid. Now there he was, in October of 1970, at Bonneville, sitting inside a rocket with wheels on it, going faster and faster with each attempt, until he shattered the absolute land speed record and flying one-mile record at more than 622 mph and flying one-kilometer record at 630.388 mph. He was The Fastest Man In The World.

The mile record stood for 13 years until Richard Noble broke it with Thrust2, and the kilometer record for 27 until surpassed by the supersonic Thrust SSC.

Craig Breedlove, whose record of 600.601 mph Gabelich broke, says, “We used to waterski on the Colorado River together. We used to race at Lions drag strip. Dick Keller from the Blue Flame crew wanted me to drive it, to break my own record. Then they wanted Don Garlits to drive it. When they couldn’t get Garlits, they asked me again, and I recommended Gary. He was young, personable and good looking, and an excellent choice.”

Gabelich had always driven for others, but he decided to build and race his own funny car for the 1972 season. He chose the then-popular Chevrolet Vega station wagon body. He put a blown Chrysler Hemi in it, using a radical mid-engine design with all-wheel-drive so he could smoke all four tires. Gabelich crashed it at Orange County International Raceway on its premiere, broke his left leg and nearly severed his right hand.

After a lengthy recovery, Gabelich looked around at other opportunities and went racing with Mickey Thompson’s SCORE off-road group, finishing second overall at Riverside in one of Mickey’s earliest events in 1975. That was also the year he nearly died in a drag boat accident at Lake Turlock, California.

Gabelich and artist/designer Tom Daniel were well on their way to building another rocket car with 800 mph potential when Gabelich was killed in a motorcycle accident on the streets of Long Beach on January 26, 1984. Gabelich is perhaps the only racer to have a city park named for him, which is in downtown Long Beach.

Award-winning freelancer Jim McCraw, a former editor-in-chief of Hot Rod and executive editor of Motor Trend, has been covering all areas of motorsports for almost 50 years.  He is currently covering vintage drag racing for Vintage Motorsport Magazine.