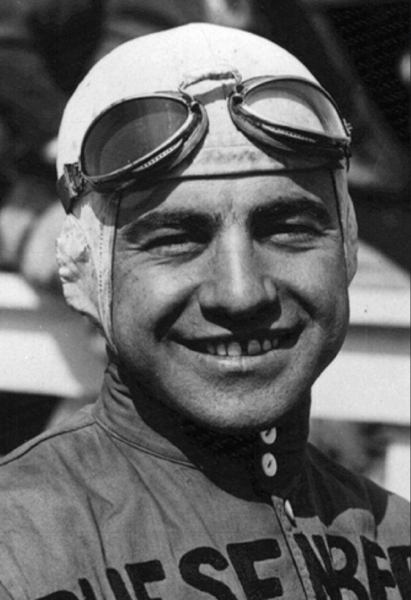 by Frank B. Tileston

It would probably come as a surprise to fans of the Golden Age of Motor Racing that Peter De Paolo didn't consider his 1925 Indy win his greatest race. After all, it had the makings of a classic contest. On the one side, Harry Miller was certain to dazzle the public with the dramatic new front-drive Miller Junior Eight. Meanwhile the brothers Duesenberg, Fred and Augie, were just as certain to put up a good fight, having fought off the Miller onslaught to win Indy honors the year before. While some would point to the lackluster balance of Duesenberg's 1924 season, others would hasten to note that driver De Paolo, inheriting the skills of his uncle Raph De Palma, had clocked an auspicious 135-mph record on the Culver City boards that April.

On race day, De Paolo's story was certainly compelling. Pitting at the halfway point when the pain from blisters on his hands became intolerable, "Daddy Duesenberg" as De Paolo called him, replaced him with Norman Batten. "My heart ached to see my baby rolling away from the pits without me," he recalled in a 1949 memoir preserved by Dick Wallen. "And more so when the engine sputtered as thought it was dissatisfied with the change. It almost stopped as Batten was leaving the pits."

When De Paolo returned from the track hospital, he learned that Batten had fallen to fifth place, relinquishing the lead to Dave Lewis and the Miller. Batten was signaled in, and De Paolo scrambled to take his place. "As I jumped back into the seat," he recalled, Daddy Duesenberg yelled, 'You've got to go like hell to get 'em, kiddo."' Go like hell he did, but fortune also played a role that day; when an exhausted Lewis tried to turn over his car to Benny Hill after 450 miles, he overshot his pit and had to go around, giving De Paolo and the Duesenberg a decisive lead.

By the 188th lap, wrote Griffith Borgeson, "Hill was running neck-and-neck with the leader, and although De Paolo was a lap ahead, the whole crowd of more than 150,000 was on its feet, roaring itself hoarse." De Paolo ultimately prevailed; it was a great victory, made greater by passing the 100-mph average speed benchmark. But it galled De Paolo that the victory was not completely his. "By obeying orders," he said, "I was deprived of winning without a relief driver." Perhaps it was for this reason that his victory in the 300-miler on the Fulford-Miami boards in 1926 was his all-time favorite. For one, there was the distance, 50 miles more than the typical board race. It was time to think strategically, and De Paolo started with an enlarged radiator core. In search of further Unfair Advantages, he and mechanic Cotton Henning, increased the car's fuel tank by seven gallons, in the hopes of going the distance non-stop. Calculating the average speed required to go . the distance without refueling, De Paolo determined that he couldn't let his engine speed rise above 5500 rpm, no matter who threatened to pass. "What a grand feeling it was," he said, "to sit there and watch the numbers on the tech register 5500 on the straightaways, go down to 5450 in the turns, then back again to 5500, lap after lap. I or the entire race, my speed didn't vary three-fifths of a second for any one lap."

The concise planning was paying off, as the high speeds forced the faster cars in for fuel at the 200-mile mark, but Dc Paolo soon found Benny Hill hot on his tail, trying to goad him into speeding up. But it didn't work; Hills car ran out of fuel and De Paolo held the lead. Harry Hartz, who had also added a larger fuel tank, was a full lap down, but there was no room for error. Hartz let another lap fall between them, certain that De Paolo would give him the lead. But De Paolo's careful planning paid off, and he took the win.

Looking back, De Paolo was especially proud of the detailed thinking behind his calculated victory: "The personal satisfaction of having planned my work, then working my plan into a wonderful victory at an average speed of 127.33 mph (less than a half mph slower than the speed I had determined would be necessary to win), and to have outfoxed Harry, definitely established this event as my greatest race."