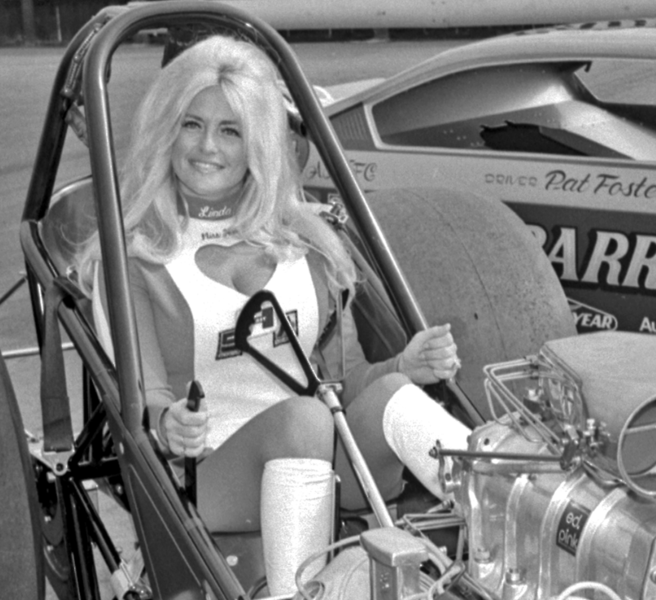 Decades before we met, I'd only seen Linda at the races from afar. The impression I got was of someone so over-the-top that, in a million years, we'd never have anything in common. Just imagining the two of us standing next to each other would be like comparing the cover of Playboy with Vogue. Which only goes to prove one should never judge a book by its cover.

I went to my first MSHFA event in 1996 when my brother Peter was posthumously inducted. Months beforehand I was already feeling anxious about the whole thing, not knowing anyone there and having to get up to make a speech. "Shoot me now" went from a joke to a prayer.

Bill "Grumpy" Jenkins was also inducted that year. Talk about opposites. But not really. We became fast friends. He even helped me with my speech. And it was while he was escorting me back from the ladies' room to our table at the induction dinner, we ran into his presenter, Linda.

She looked exactly as I remembered, wearing a dress only she could wear, and was all at once warm and welcoming. She told me how much she cared about Peter and how proud she was that he was being inducted. When she teared up recounting a letter he'd written her, offering to show it to me sometime, it was all I could do to contain my composure. Noticing my nerves, she assured me I'd be fine. She told me she'd be smiling at me from her table when I got onstage. Such a nice thing to say. Then she hugged me goodbye. And don't you know, she delivered on her promise, giving me a little wave, too, which was very comforting.

From then on we stayed in touch and became friends. Dear friends. More like sisters, really. And I've come to know that, beyond her va-va-voom appearance and Mae West-like sashay, she's a no-nonsense country girl with old fashioned values, street smarts, a wicked sense of humor, who wholeheartedly loves her fans (it's uncanny how she remembers their names) and motorsports family. Time after time I've witnessed how she invests her heart in racers and their sport. A sport that's long become her life. And when you sprinkle in a fair amount of je ne sais quoi, that special something that draws so many to her, the sum of Linda's qualities has not only outperformed the brand ambassador norm, they've rightfully earned her the title, "First Lady of Motorsports."

For years I'd been hoping Linda would make the inductees list, but I would never tell her when she was nominated in case she didn't make it. One year, she came up short by only one vote but, of course, I didn't mention it. So when Ron called with the names of our new inductees, he waited until last to mention Linda. He knew I'd be thrilled. Indeed, I think I screamed, I was so happy. And calling Linda about it was the best. Kind of like two little girls jumping up and down and yelling, yippee! It's so great that she's finally receiving her place among our Heroes of Horsepower. Congratulations to you, Linda!

Jennifer Revson is a longtime member of the Motorsports Hall of Fame of America's Board of Trustees and motorsports fan. She is the sister of racers Doug and Peter Revson, the latter having won pole for the 1971 Indianapolis 500, two Formula One events and the 1971 SCCA Can-Am championship.