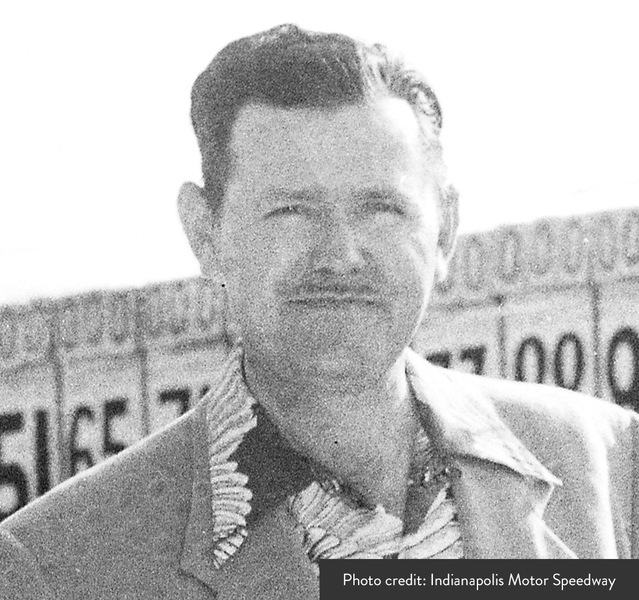 Once American thoroughbred automobile racing came to be contested by purpose-built specials rather than modified production cars, its eras were defined by the men who made the machines, and the end of World War II opened the era of Frank Kurtis.

Those who knew him speak of his ability to merge form and function, his reliance on the common-sense approach to problem-solving, his attraction to experimentation and his tendency like that of fellow inductee Harry Miller to surround himself with others of like mind and similar talent.

Kurtis fell in love with Indianapolis as a youth, and took his first real shot at the Speedway in 1946 when he built the supercharged V8-powered, front-wheel-drive Novi Governor Special for Bud Winfield. Veteran Ralph Hepburn set a new track record with the sleek creation, qualifying at an average speed of 133.944 mph, a mark that stood until 1950 when superseded by another Kurtis Kraft car. That was a dirt-track model driven by rookie Walt Faulkner. That same year, a rear-drive Kurtis with independent front suspension gave both Frank and Johnnie Parsons their first Indy wins.

Two years before, Duke Nalon had led most of the race in one of the legendary Novis, only to run dry 18 laps from home after an air bubble kept his fuel tank from filling fully. He ultimately finished third, the best placing ever by a Novi.

Kurtis cars won 54 National Championship races - the first at Atlanta in 1946, courtesy of George Connor, and the last by rookie Van Johnson at Langhorne in 1959 - a total that ranks him equal seventh with contemporary Kuzma on the all-time Champ Car constructors win list. Five of those victories came at Indianapolis, two by Bill Vukovich and one from each Parsons, Lee Wallard and Bob Sweikert.

It was his 1952 introduction of the roadster, however, that secured Frank Kurtis' place in history. To achieve a smaller frontal area and decrease aerodynamic drag, he sat the driver alongside, rather than astride the driveshaft, and with Howard Keck's KK500A, Vukovich dominated three consecutive Indy 500s. Driving Lindsey Hopkins' next generation KK500C, he was running away with a fourth in 1955 when an incident on the back straight added him to the death toll of racing's darkest year.

Kurtis' cars claimed their five 500s in only six years, missing the sixth in '52 when seized steering sent Vuky into the third turn wall with nine laps to go. The next year, Kurtis-built machines filled 24 of the 33 grid slots and took the first seven finishing positions. Between '47 and '57 they collected five wins, six seconds, seven thirds, five fourths and nine fifths at Indy.

Kurtis also created the revolutionary Cummins Diesel that won the pole at Indy in '52, and is famous for his groundbreaking midget designs, cars that remain cherished collector pieces, just like his Champ Cars.