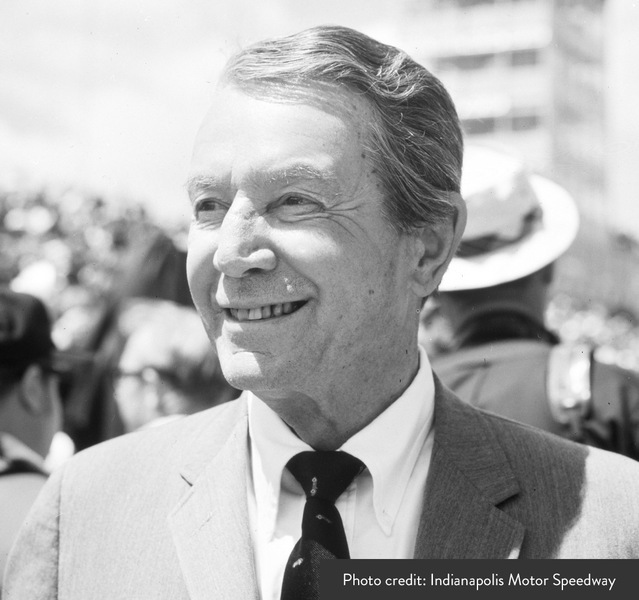 Born into wealth, Anton "Tony" Hulman Jr. embellished his personal resources with courage, foresight and a passion for automobile racing to become the savior of America's foremost motorsports facility and its greatest one-day sports spectacle, the Indianapolis 500.

Hulman purchased the Indianapolis Motor Speedway at the close of World War II, after the 36-year-old track had reached deplorable condition in four years of neglect. Three-time Indy 500 winner Wilbur Shaw fought to save the track from virtual extinction by seeking out a businessman to purchase the facility and revive the tradition of the annual Memorial Day event.

When Shaw located the Yale graduate from Terre Haute, Indiana who had a love for antique cars and was a regular attendee at the Indianapolis 500, he knew he had found the man he was looking for. It quickly became evident that Tony Hulman possessed the unselfish desire to see the great race revived and the Speedway re-established as the showcase it once was.

Continuing to manage his family's 100-year-old general wholesale firm, Hulman and Company, and diverse other business interests ranging from breweries to refineries to real estate, Hulman assumed the presidency of the Speedway in 1954 when Shaw died in a private plane crash. His personality soon became engrained into that of the Brickyard itself. His leadership was responsible for improvement upon improvement.

Hulman's extraordinary organizational prowess was put to its utmost test when AAA abruptly exited from auto racing in 1955. His skillful maneuvering resulted in the creation of the United States Auto Club.

Hulman's ringing rendition of the command, "Gentlemen Start Your Engines" became synonymous with auto racing and is now established as one of the most familiar phrases in all of sports.

Upon his death in 1977, Tony Hulman left a breathtaking motorsports facility unparalleled by any on the planet, together with an expansion and improvement program that may never be considered complete. He also left a legacy of having rescued an entire sport from the brink of oblivion and having breathed into it an unimaginable vitality. All racers and fans are in his debt.