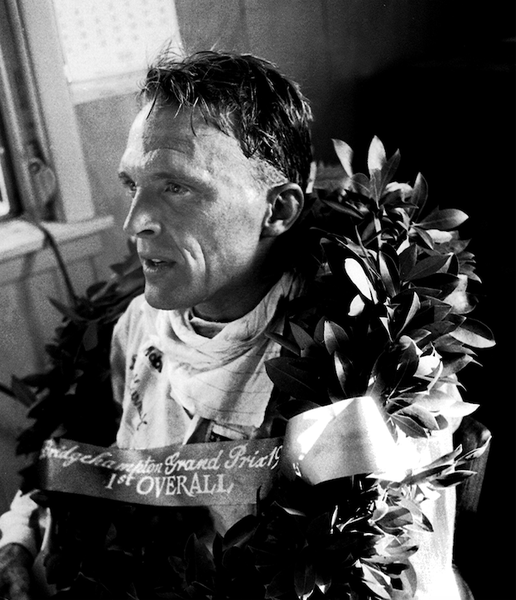 Dan Gurney drove his first race at California's old Torrey Pines circuit in 1955, and within four years was sitting in a factory Ferrari at the French Grand Prix. Two years later he stood alongside Phil Hill on the rostrum at Monza as Hill became American's first World Champion.

Even though he won more Grand Prixs, four than any other American until Mario Andretti, Gurney was never able to duplicate Hill's feat during a Formula One career that spanned 11 seasons. He was, however, one of few in Grand Prix racing able to run with the legendary Jim Clark, and at the fleet Scot's funeral Clark's father confided that Dan had been the only driver his son had feared.

Versatility was Gurney's trademark, he could drive anything, anywhere, and take it to the front. Victories came in Formula One and Indy Cars, the Can-Am and Trans-Am and at LeMans. He won the 500-mile stock car race at Riverside five times in six years, and was an integral part of the Ford Cobra team that brought a World Manufacturer's Championship to the USA.

Stronger even than his seemingly boundless ability was an overpowering will to win, the continual urge to go faster and do better. This eventually led to the creation of All American Racers to build the successful line of Eagle racing cars that continues today in the form of Toyota-powered prototype sports cars.

His victory in the 1967 Belgian Grand Prix remains the only Formula One win by an American driver in a car of his own construction, and he is generally regarded as the man who fundamentally shaped the modern era of the rear-engined Indy Car.

An engaging man with an active intellect and a sharp sense of humor, Dan Gurney is far more than just a string of statistics. An outspoken advocate of fairness and decency, he will always be an excellent ambassador for motorsports.