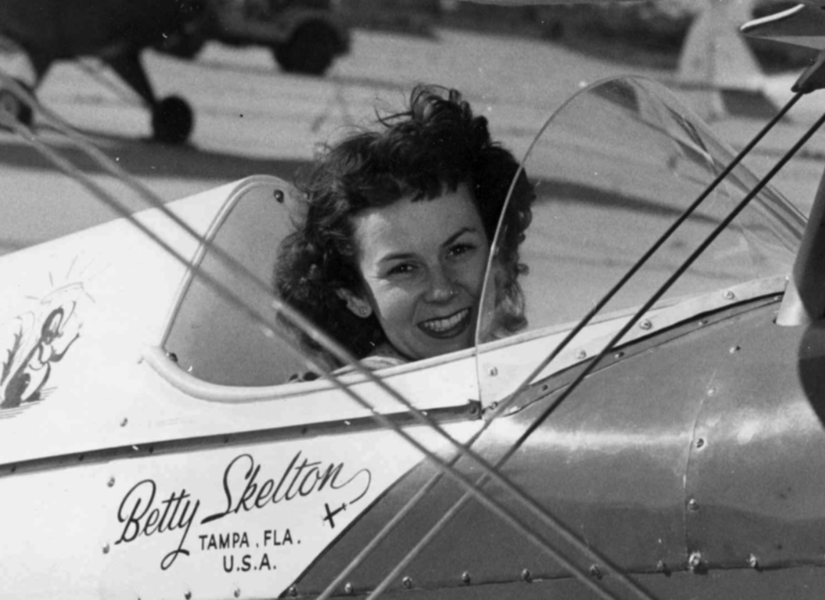 For more than half a century, Betty Skelton has been known as the "First Lady of Firsts." The Florida native earned her nickname the hard way, whether flying at 29,000 feet or traveling at speeds greater than 300 miles per hour in a jet-powered car. In the process of setting 17 aviation and race car records, she also paved the way for women to enjoy equal opportunities in aviation, sports and business. Nearly 35 years after retiring, Betty still holds more combined aircraft and automotive records than anyone in history.

Betty Skelton was born in Pensacola, Florida on June 28, 1926 and made her very first solo flight at the tender age of 12 at the controls of a 40-hp Taylorcraft. She took up aerobatics at 18, giving her first public performance in a borrowed Fairchild PT-19. She bought a 1929 Great Lakes 2T1A biplane and began her professional aerobatic career in 1946 at the Southeastern Air Exposition in Jacksonville.

She won her first International Feminine Aerobatic Champion on Jan. 1, 1948 flying her Great Lakes. It was there that she noticed a striking new little biplane, the Pitts Special S-1C, an experimental single-seat open-cockpit biplane, and the smallest aerobatic airplane in existence at the time. In it she became the first woman to perform an inverted ribbon cut. Betty won her second and third consecutive International Feminine Aerobatic Championships in 1949 and 1950. That plane named "Little Stinker" now hangs in the National Air and Space Museum's Steven F. Udvar-Hazy Center at Dulles Airport. Naturally it is suspended inverted.

Betty sought other records too. She raced in the 1949 Cleveland Air Races and set a women's altitude record of 29,050 feet in a Piper Super Cub. Walter and Olive Ann Beech asked her to fly demonstration flights of the Beech T-34 for an Air Force evaluation team and Beech won the contract. Skelton also wrote columns for aviation magazines and appeared in advertisements.

By late 1950, Betty had achieved the highest marks in aerobatics but, with the barriers in place against women, she had little incentive to continue. That year she met NASCAR founder Bill France, who talked her into driving at Daytona Beach during Speed Week. Not only did she drive the pace car at Daytona, she also set a stock car record in a 1954 Dodge Red Ram V8 on the beach. All of a sudden, Betty had a new career. As auto industry's first female test driver, she guided "L'il Miss Dodge," a jump boat, over a 1955 Custom Royal Lancer on a ramp at Florida's Cypress Gardens and she was part of a team that drove a 1955 Dodge to 395 new records at the Bonneville Salt Flats. In 1956, Betty became one of the a top women advertising executives working with the General Motors Company in print, television, and automobile demonstration runs. Driving mostly Corvettes, because she was the official spokeswoman for Chevrolet, Betty earned a number of Feminine Speed Records over the measured-mile, plus a transcontinental mark as well. .

In 1959, Look magazine asked her to undergo numerous physical and psychological tests given to original Mercury 7 astronauts. She landed on the cover of Look, and, although she would have loved the chance, she never had any illusions that a woman would be selected for the Mercury program.

Motorsports Hall of Famer Art Arfons offered Betty a chance in 1965 to drive his open cockpit; F-86-D J-47 Sabre-jet powered "Green Monster – Cyclops" on the Bonneville Salt Flats. She went on to set the Women's Land Speed Record with a 276 mph average – while posting a one-way run of 316 mph.

Throughout her life, Betty has served as a great ambassador for aviation and an inspiration for men and women alike. So much so that each year the United States National Aerobatic Championships honor the highest placing female pilot with the" Betty Skelton First Lady of Aerobatics" award.