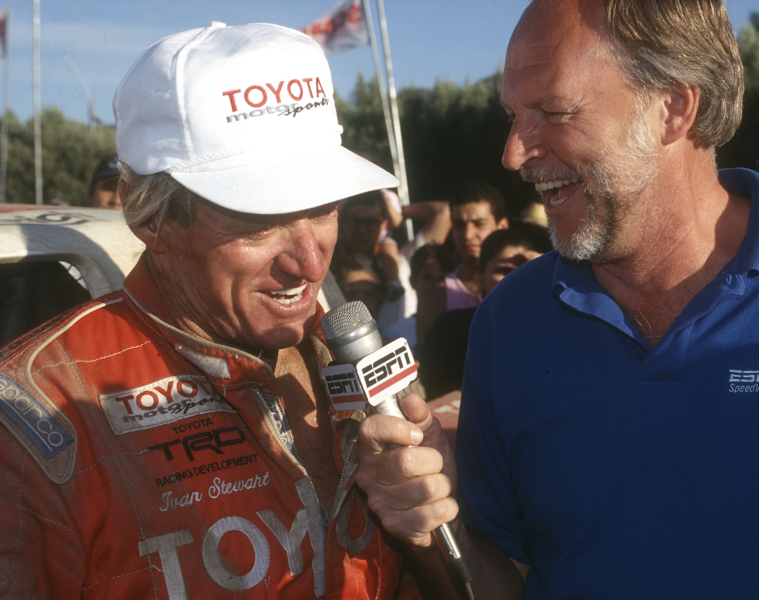 The sun has long since set on the sleepy town of San Ignacio midway down the Baja Peninsula. In the distance, bright lights rapidly move in unison, influenced by the roar of his Toyota V8 grappling for traction through the mountains leading down to the town square. As the ear-crippling sound comes closer the awaiting pit crew's excitement builds until race leader, The Ironman, Ivan Stewart suddenly appears. He abruptly stops for service and, as quickly as he arrived, Ivan's off in the distance heading south for yet another Baja 1000 victory.

An ironworker by trade, Ivan sought his destiny by winning his first of 84 victories in 1973. An ardent fan, I first met Ivan in 1979. Having already built his name in the unlimited single-seat category, Ivan moved to the more ferocious Class 8 truck division in 1978, winning early and often. His team owners, Coco and Charlotte Corral, were looking for a new race shop and chose my company for their 1980 campaign. It was this opportunity that led me to understand who the man behind the impressive resumé was.

Consummate professionals relentlessly push themselves toward perfection and no one knows better than Ivan the commitment necessary to be the very best. Ivan was fortunate that Linda, his wife of 52 years, shared his passion and remained an integral part of Ivan's success by giving him the latitude to pursue his dreams and unwavering encouragement to focus on his craft. This family support truly resonated when Ivan was faced with making the courageous decision to leave the comfort of team owners he knew and a manufacturer he had enjoyed success with to a new team and OEM.

It was during this time that an opportunity came my way to move with Ivan to Toyota. As one can imagine, the decision to step away from a booming, full-of-testosterone, full-size Class 8 to a smaller compact truck took a lot of thought. That said, the rest is history.

What attracted me to select Ivan as Toyota's premier athlete was not only his speed and toughness, but his innate ability to extract the maximum out of his racecar and define the very limit of its abilities without destroying it.

In 1983 Ivan began his relationship with Toyota in a stadium series started by 1990 inductee Mickey Thompson. Ivan went on to win multiple driver and manufacturer championships, with more victories than any other competitor. In 1984 Toyota expanded its truck marketing efforts to include desert racing. Together Ivan and Toyota scored race wins and championships too numerous to list until his 1999 retirement.

Ivan's contribution to the sport goes beyond driving. He developed what was then the most popular motorsport arcade game in America, established his own SCORE Pro-Truck category, is a celebrated author, and has represented Toyota for close to 40 years.

Cal Wells III has won in every form of racing he's tackled. In addition to his PPI Motorsports' numerous off-road victories and championships, his teams have won IndyCar Series and Monster Energy NASCAR Cup Series events.