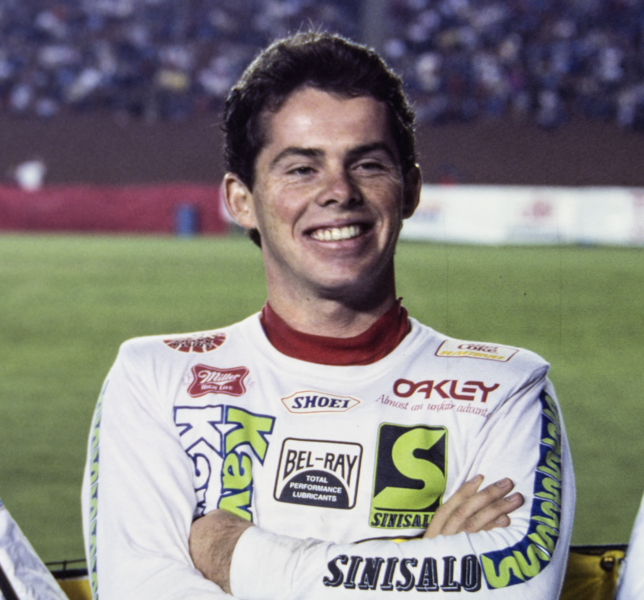 Instead, a career that led from motocross and supercross stardom to the White House, and from the Skip Barber Racing School to the Indianapolis Motor Speedway, earned "Wardy" descriptive adjectives like unassuming, soft-spoken, steady, professional and cool-headed.

Jeff Ward is just the 17th motorcyclist inducted to the Motorsports Hall of Fame, and he comes with stellar credentials born of God-given talent, an outstanding work ethic and a relentless inner fire.

When Jeff retired from AMA motocross and supercross following the 1992 season he did so with solid Hall of Fame credentials: seven major AMA championships, 56 national wins and a record seven appearances on winning Americans teams in the famed Motocross des Nations.

In 14 seasons with Team Kawasaki he probably sold more green machines than John Deere. He and his 1987 Motocross of Nations teammates met with President Reagan in the White House. Through it all, he remained humble and approachable.

The Scottish-born Californian stepped back from the motocross grind after the '92 AMA season, but he was far from finished with motorsports. Granted, he was weary of the grueling demands of 30-plus AMA championship events each season. But his competitive fire still burned, and two more impressive chapters – one still ongoing -- were yet to be written in his racing career.

When Ward decided to try his hand in auto racing, he as usual set his sights high: Indianapolis. Five years later he not only made it to the famed Brickyard but led 49 laps, finished third and was a few gallons of methanol shy of winning the Indy 500. Six more "500" starts followed, including a runner-up effort in 1999. Car owners including Rick Galles, Eddie Cheever, A.J. Foyt, Chip Ganassi and Tony George entrusted Ward with their half-million-dollar IndyCars and Ward seldom disappointed.

During his second career in open-wheel autos, Ward scored an Indy Racing League victory in Texas and went the full 200-lap distance in the Indy 500 with higher frequency than Hall of Fame legends including A.J. Foyt, Mario Andretti, the Unser brothers and Rick Mears. He didn't always have the fastest wheels under him, but he made the most of what he had and kept it off the fence.

Meanwhile, Ward's lifelong love affair with motorcycles continued. The emerging SuperMoto discipline lured him out of retirement in 2003, and true to form he settled for nothing short of excellence. By 2004 he had won the AMA SuperMoto Championship, and at age 45 he is again a title contender in 2006.

It would be outrageous to say that Jeff Ward is the fastest guy in the Motorsports Hall of Fame, but it is no stretch at all to assert that he is one of its greatest athletes. His longevity in the physically-demanding motocross game is unrivaled and he has demonstrated beyond doubt that he has both the strength and toughness to endure 40-minute motos and the courage and precision to thread the IndyCar needle at 200-plus.

Jeff Ward: A worthy inductee to the Motorsports Hall of Fame.