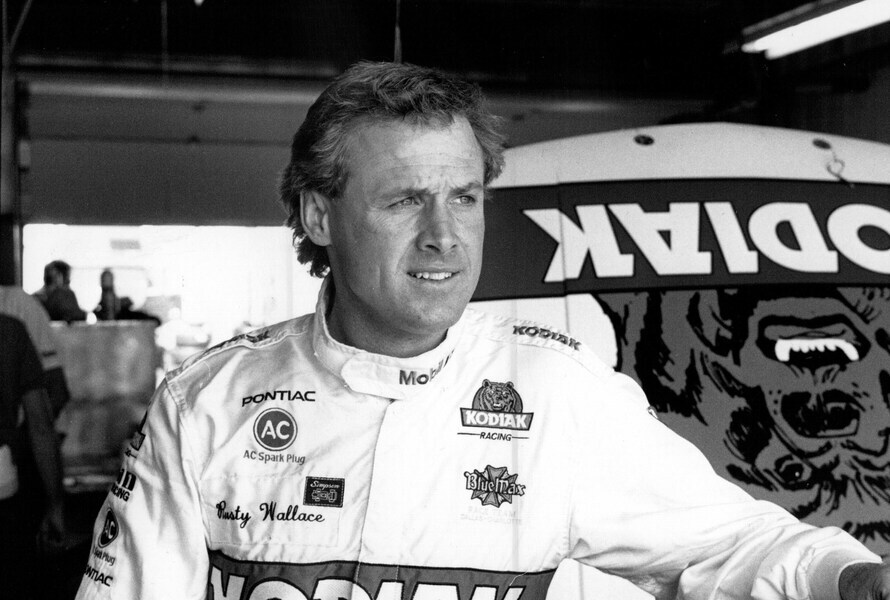 Make you a little wager. That by the end of the little discussion we’re about to have, you’re going to hold one Russell William “Rusty” Wallace Jr. in even higher esteem than you already do.

Even possibly if your name happens to be Rusty Wallace Jr. It’s not that anyone thinks the Missouri native was anything less than one of the greatest drivers of his generation. Hell, NASCAR voted him one of The 50 Greatest NASCAR Drivers of All Time during its 50th anniversary celebration. (An honor he shares with fellow 2014 inductee Marshall Teague.) It’s just that when you look back on his career, you realize the things he accomplished are even greater than you remember.

He’s Number 9 in all-time wins with 55. Number 3 in road course victories behind Jeff Gordon and Tony Stewart. And Number 1 all-time in short-track wins with 34. Let that sink in for a minute: The greatest NASCAR short-track driver of all time.

Not to mention Wallace won at least one race for 16 straight seasons. The only two people to win more are David Pearson (17) and the King himself, Richard Petty, with 18. So what drove Wallace to the success he achieved?

“Racing is all I ever knew—all I ever wanted to do,” says Wallace, “from the time I was a little kid. I used to follow my Dad, Russ, to all of the local short tracks around St. Louis and I was just hooked.”

Wallace was unusual too in that he understood cars better than most drivers. Knew the way they worked. Knew what it took to make them work better. “I think a lot of people in the garage knew what a hands-on kind of driver I was. I always took pride in understanding all aspects of my car. I felt that if you didn’t understand the car, you couldn’t effectively tell your guys what it was doing.”

Wallace won one championship, in 1989, driving for owner and fellow 2014 inductee Raymond Beadle. He could have won several more. In ‘88, he tied Bill Elliott with 6 wins apiece but lost the title by a paper-thin 24 points. In ‘93, driving for Roger Penske, he won a season- and career-high 10
races to Dale Earnhardt’s 6, but again fell just short at a time when NASCAR rewarded consistency more than victories.

Wallace’s 10 W’s that year showed his human side as well. At the conclusion of each, he did a “Polish Victory Lap” in honor of friend and 1992 champ Alan Kulwicki who’d perished in an aircraft accident earlier in the season.

So which of his achievements does he hold closest to his heart? “Honestly, all of the wins and my championship definitely meant a lot to me, but I think that the achievements that mean the most came after I finished driving.

And you can’t be held in any higher esteem than that.