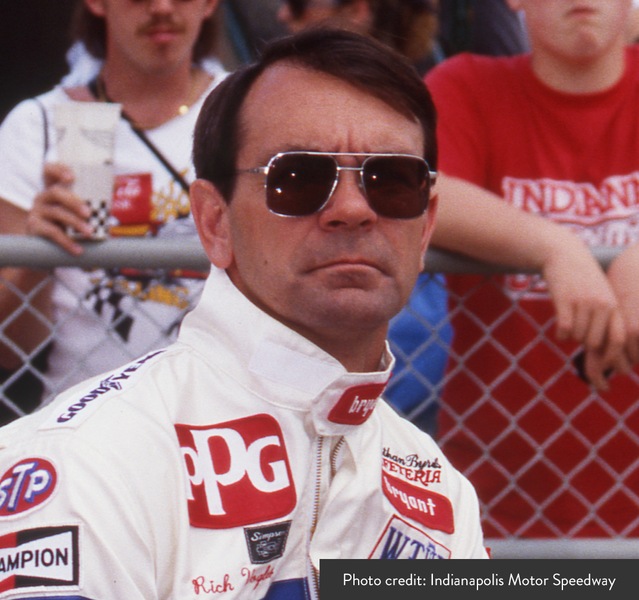 It's easy to use stats to tell his story since they dwarfed everyone's but A.J. Foyt. But the best way to describe the career of Rich Vogler is by recalling a sprint race in 1979 at Winchester.

That was the day when Vogler put on a show that encapsulated the essence of his skill and bravado. Driving the old upright Eaton Oiler, owned by Ray & Cissy Smith, he stalked Steve Chassey for 40 laps around those historic high banks.

Chassey was in a roadster, specially built for pavement and speed, which he'd been pretty much untouchable in that season.

It should have been a cakewalk but it turned out to be a dogfight as the man with forearms like Popeye chased Chassey like two dogs in heat.

"Every lap I heard him and once I looked over my shoulder and he looked like he was on dirt, with the wheel going back and forth," said Chassey. "I couldn't believe he did that for 40 laps."

And while Vogler finished a car length behind in second, his performance illustrated exactly what made him such a great driver. He always expected to win, never gave up and usually got the most out of the least.

Maybe it was the hard-scrabble upbringing from his racing father, Don, who put Rich's mom, Eleanor, in the corner with an orange glove and would order his son to drive to her before backing off the throttle.

The indisputable fact is that nobody on four wheels ever drove harder than Vogler. He had no cruise control, no pacing and no fears. He ran wide open every time he strapped in.

Hence, the nickname "Mad Dog," and his reputation as the throttle psycho of his generation. But there was a method to his madness and he could win on heavy tracks, hard slickies, bull rings, high banks and flat tracks as his 134 USAC victories and six championships would attest.

He riled up a lot of his competitors with that aggressive mentality but he was always worth the price of admission.

Even in his limited time in Indy cars, Richie entertained us. In 1988, with time running out in qualifying, he hopped into a strange car, ran one hot lap, put the car in line, ordered a couple chassis changes and stuck 'er in the show.

It appeared that he'd weathered his wild days of the '70s – making five consecutive Indy 500s from 1985-89 and beginning to dabble in stock cars. But he lost his life in a sprinter at Salem in 1990, where he was leading comfortably but trying to lap yet another car.

He lived to be on the loud pedal and backing off wasn't in Richie's vocabulary. It was his mantra, his motivation and his legacy.